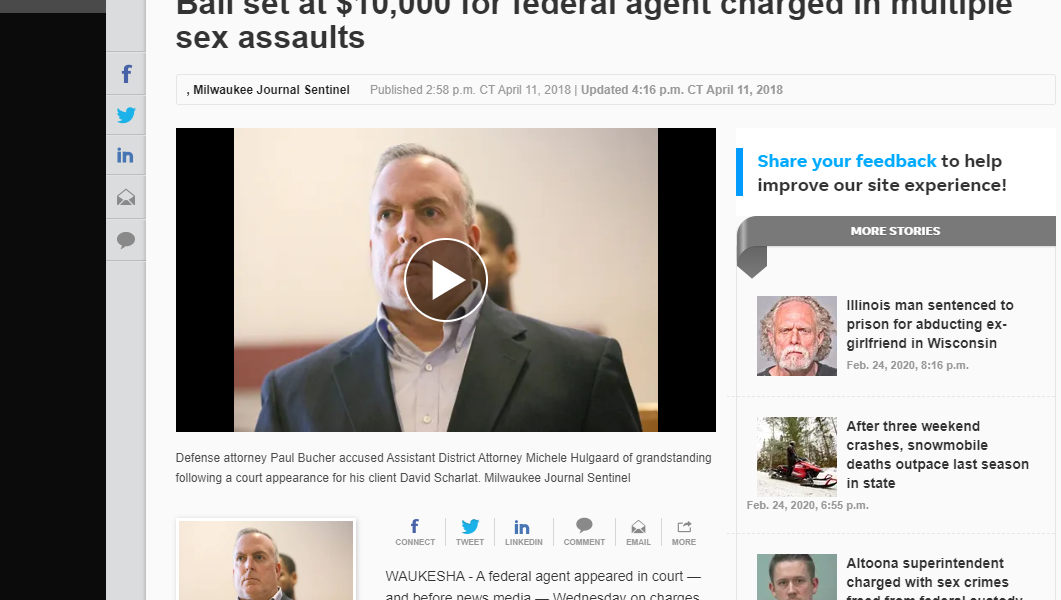 WAUKESHA – A federal agent appeared in court — and before news media — Wednesday on charges he sexually assaulted three women over four years.

Though David Scharlat voluntarily came to court on a summons, prosecutors asked that he post $100,000 bail to remain free while the case is pending.

Waukesha County Circuit Court Commissioner Laura Lau noted it seemed a bit contradictory to ask for high bail while allowing Scharlat to come in on a summons, and set bail at $10,000. Scharlat must also get fitted for a GPS monitoring bracelet, turn in his passport, not possess or use weapons or have any contact with the three victims.

Defense attorney Paul Bucher said in court and afterward that seeking any cash bail amounted to grandstanding, and said Assistant District Attorney Michele Hulgaard violated ethical standards for prosecutors by reciting “salacious” details of the complaint — and other details — at length at the brief court appearance.

Bucher said all the women consented to sex with Scharlat, and that he will vigorously defend the several felony charges that could send him to prison for decades if he is convicted of them all.

Last week, Bucher petitioned the court to order news media to not show Scharlat’s face as part of any coverage of the case, citing his undercover work for the U.S. State Department’s Diplomatic Security Service. Bucher withdrew the petition Tuesday after it was reported in the Journal Sentinel.

There has been some confusion as to Scharlat’s status. In court Wednesday, Hulgaard noted that the State Department relieved him of all his duties, made him surrender his weapon and badge, and escorted him from a government building to his home in April 2015.

In an April 9 letter to Hulgaard, an acting deputy assistant secretary with the Diplomatic Security Service said Scharlat is presently employed, but that disclosure of his identity would not adversely affect any open case or investigation.

A State Department official told the Journal Sentinel on Tuesday most of the same story — that Scharlat was relieved of all duties in 2015, but did not specify that he was fired.  Bucher said again Wednesday that Scharlat is merely on unpaid administrative leave from the federal agency.

She called him a “big threat to the community” with little to lose if he fled the country or tried to intimidate witnesses in the case.

Bucher noted Scharlat is a lifelong resident of Waukesha County, with no criminal record, who has expected the charges for months and had ample opportunity to disappear earlier if that was his intent. He also said Scharlat has responded to temporary restraining orders filed in the past by two of the women listed as victims in the criminal complaint.

Scharlat waived a preliminary hearing, was bound over for trial and entered not guilty pleas to all charges. His next court date was set for June 8.

According to the criminal complaint filed March 30, the victims say Scharlat assaulted them at a hotel, the home of a former Brookfield police lieutenant and Scharlat’s own home over a span of four years. The women told investigators that Scharlat reminded them he was a federal agent and sometimes kept his gun and badge nearby during the assaults.

One woman told police she was assaulted by him twice last fall. Her injuries required multiple surgeries.

Another woman described how Scharlat assaulted her and made “so many threats to her over the years, including that he would kill her.”