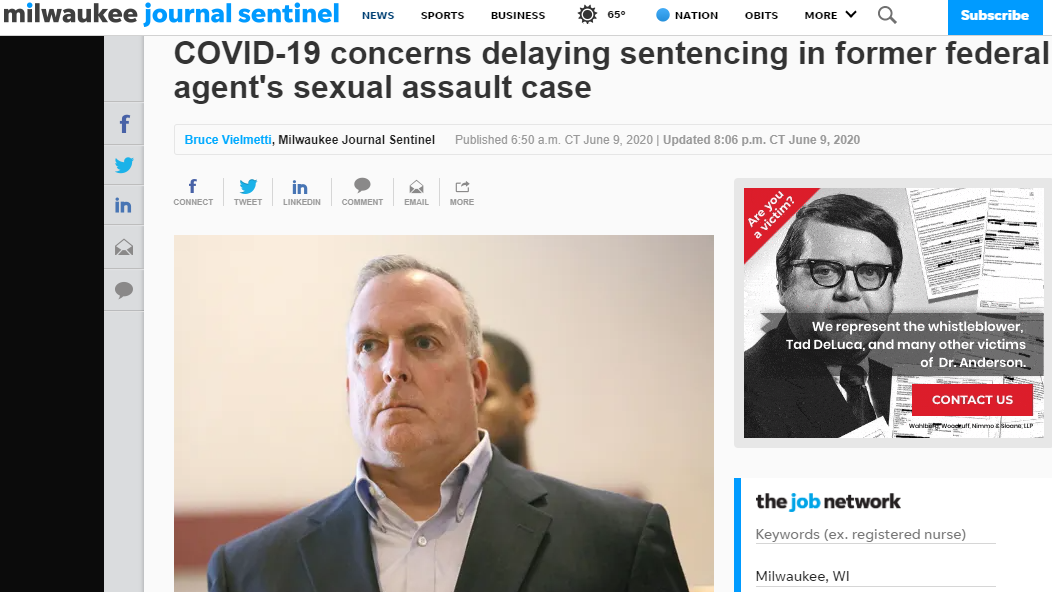 Sentencing in a high-profile Waukesha County sexual assault case that was delayed once over the coronavirus pandemic was put off a second time Monday because the prosecutor objected to the defendant appearing by Zoom.

David Scharlat, 55, was charged in 2018 with sexually assaulting three women in Waukesha County, from 2013 to 2017. On February 14, a jury convicted him of one of the assaults and acquitted him of the incidents involving the two other women.

His attorney has said all the dozens of sexual encounters his client had with all three women over the years were consensual, and they all became vindictive after learning that none of them were his exclusive girlfriend.

Scharlat, a former Brookfield police officer and agent with the U.S. State Department’s Diplomatic Security Services, was originally set for sentencing May 21, to allow extra time for him to have a private pre-sentence investigation report compiled.

He’s been out on bail since his arrest. Because of courthouse restrictions imposed out of public health concerns, the May date was put off to Monday.

Scharlat’s attorney, Paul Bucher, has health concerns that have kept him from appearing in person at the courthouse since early in the pandemic. He and Scharlat requested the sentencing be done remotely, and Scharlat agreed to waive his right to be present in person.

The victim, who lives out of state, “strongly opposes” a virtual sentencing or any delay, Hulgaard wrote in a letter to Lazar on Thursday

Hulgaard said that when the May date was reset for Monday, there was no suggestion it would be held remotely or she would have objected immediately and demanded the sentencing take place, in person, Monday.

Instead, the parties did appear via Zoom on Monday, but only to set a new date for sentencing. It is now set for June 26, assuming the Wisconsin Supreme Court approves Lazar’s plan to hold the hearing with extra public health precautions.

The victim, C. Kimberly Toms, has previously agreed to being identified by the Milwaukee Journal Sentinel. Before she testified at Scharlat’s trial, she had spoken extensively about him and their relationship in a documentary film she made.

“Escaping Fed” is named for Toms’ nickname for Scharlat, who is never named in the documentary. Based on a trailer and deleted scenes available online, the film features Toms telling her story to a camera, or sometimes over a Skype-style exchange on a computer, intercut with some reenactments of scenes with an actor playing Fed.

Notes about the production say she started the project in 2017, still doubtful that Scharlat would ever be charged, and concerned that if anything happened to her, the story would not have been recorded.

The jury found Scharlat guilty of second-degree sexual assault, with threat or use of force, for an incident with Toms at his home over Labor Day weekend in 2013. He faces up to 25 years in prison and 15 years of supervision.

Bucher, the defense attorney, said Monday he intends to ask Lazar to reconsider his request that she reject the jury’s verdict as not supported by the evidence. She denied the motion immediately after the verdict was returned.