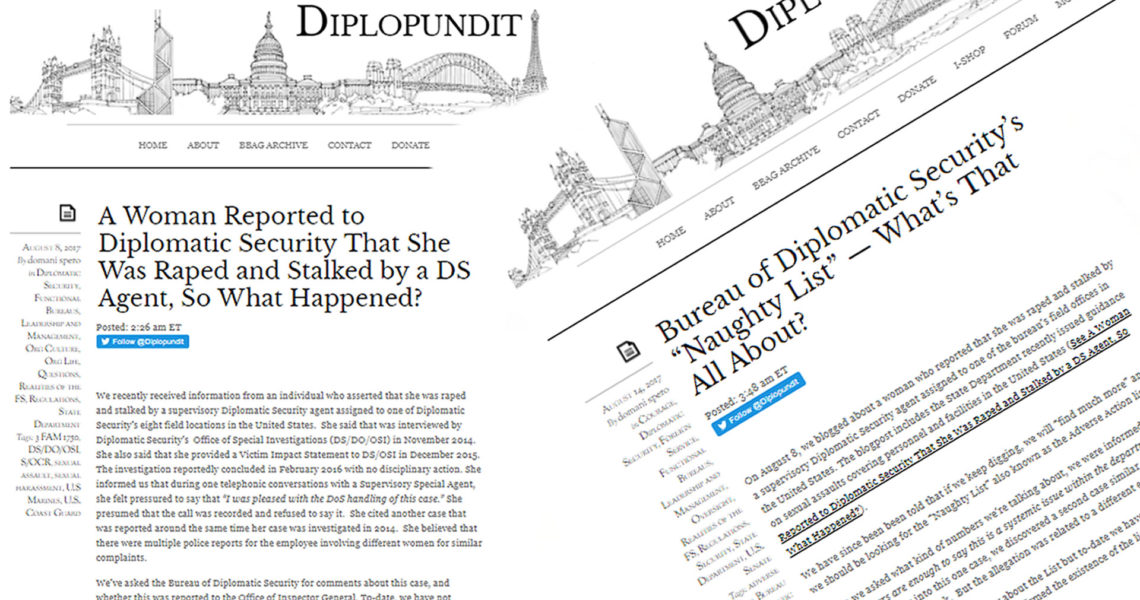 Dear Secretary Tillerson: What Are You Going to Do About This? | Diplopundit.net | December 11, 2017

A new mail in our inbox:

“In reference to a blog posting dated August 8th, you reported on a woman who was raped and stalked by a supervisory special agent.  This employee is still employed and he has struck again.  Why is he still employed yet still committing offenses?”

The new case includes a petition for temporary restraining order/injunction filed on November 13, 2017. It appears that the petitioner in this case did testify but the injunction hearing is scheduled for April 2018.

She said that was interviewed by Diplomatic Security’s  Office of Special Investigations (DS/DO/OSI) in November 2014. She also said that she provided a Victim Impact Statement to DS/OSI in December 2015. The investigation reportedly concluded in February 2016 with no disciplinary action. She informed us that during one telephonic conversations with a Supervisory Special Agent, she felt pressured to say that “I was pleased with the DoS handling of this case.” She presumed that the call was recorded and refused to say it.  She cited another case that was reported around the same time her case was investigated in 2014.  She believed that there were multiple police reports for the employee involving different women for similar complaints.

We’ve asked the Bureau of Diplomatic Security for comments about this case, and whether this was reported to the Office of Inspector General. To-date, we have not received an acknowledgment to our inquiry nor a response to our questions despite ample time to do so.

Read more: A Woman Reported to Diplomatic Security That She Was Raped and Stalked by a DS Agent, So What Happened?

We are aware of at least three different incidents allegedly perpetrated by the same individual who has law enforcement authority. One of these three identifies herself as “Victim #4”.

Per Department of State Authorities Act for Fiscal Year 2017:

(A) IN GENERAL.—The head of a bureau, post, or other office of the Department of State (in this paragraph referred to as a ‘Department entity’) shall submit to the Inspector General a report of any allegation of—

(i) waste, fraud, or abuse in a Department program or operation;

(ii) criminal or serious misconduct on the part of a Department employee at the FS–1, GS–15, or GM–15 level or higher;

(iii) criminal misconduct on the part of a Department employee; and

(iv) serious, noncriminal misconduct on the part of any Department employee who is authorized to carry a weapon, make arrests, or conduct searches, such as conduct that, if proved, would constitute perjury or material dishonesty, warrant suspension as discipline for a first offense, or result in loss of law enforcement authority.

c.  The first report by any Department entity should cover the period beginning December 16, 2016 (the day the law went into effect), and ending not later than five business days before the date of that report. Thereafter, any additional reportable information is due not later than the five-business day deadline stated in the statute.

The case of the individual in the August blogpost occurred before the Department of State Authorities Act for Fiscal Year 2017 became law. But this latest case was filed on November 13, 2017.

We’ve asked Diplomatic Security for comment but despite ample time to do so, we only hear radio silence.

We’ve inquired from State/OIG if DS officially reported this case to them, and we got the following response:

“In response to your inquiry, it is best addressed by the Department.”

What the what?! So we end up asking our dear friends at the State Department’s Public Affairs shop:

We recently received information that the same individual is now alleged to have committed similar offenses in another state. This is not the first nor the second allegation. Since DS never acknowledged nor responded to our request for comment, and State/OIG told us we should direct this question to you, we’re asking if you would care to make a comment. What is the State Department’s response to this case involving an individual, a supervisory DS agent with multiple allegations who remains a member of the agency’s law enforcement arm?

Apparently, our dear friends are still not talking to us.  As of this writing we have not received any acknowledgment or any response to our inquiry.  Should we presume from this silence that the State Department hope that we just get tired of asking about this case and go away?

Anyone care that there is potentially a serial offender here?

In 2014, a woman (identified herself as Victim #4) reported that she was raped and stalked by a supervisory agent of Diplomatic Security.

In April 2015, a case was filed for Domestic Abuse-Temp Rest Order against the same person.  The case was closed. Court record says “The court did not issue an injunction against the respondent in this case. The reasons were stated on the record and may be explained in the final order. No adverse inference should be drawn against the respondent when an injunction is denied or a case dismissed. The fact that a petition was originally filed means nothing.”

On November 6, 2017, another case for “Harassment Restraining Order” was registered against the same individual and closed. The court sealed the name of the complainant. The court record says  “The court did not issue an injunction against the respondent in this case. The reasons were stated on the record and may be explained in the final order. No adverse inference should be drawn against the respondent when an injunction is denied or a case dismissed. The fact that a petition was originally filed means nothing.”

On November 13, 2017, a “Domestic Abuse-Temp Rest Order” was filed against the same individual, and this case is scheduled for an injunction hearing on April 30, 2018.

A source speaking on background explained to us that once Diplomatic Security completes the investigation, its Office of Special Investigations (OSI) sends the case report to the Bureau of Human Resources Conduct, Suitability, and Discipline Division, Office of Employee Relations (HR/ER/CSD).  This office is under the responsibility of the Director General of the Foreign Service, or in the absence of a Senate-confirmed appointee, under the authority of Acting DGHR William E. Todd, who reports to the Under Secretary for Management (currently vacant), who in turn reports to the Deputy Secretary of State John Sullivan.

“The most concerning cases can take years and remember, the employee is waiting from CSD to hear proposed discipline. Almost everybody appeals that initial decision. Then they appeal the next decision to the FSGB which, not infrequently, dismisses cases or reduces disciplinary action for timeliness. Each step in the process can take multiple years and DS can’t do anything other than remove law enforcement authority when appropriate.”

The Bureau of Diplomatic Security, OIG, and/or the Office of Civil Rights (S/OCR) may initially investigate misconduct involving both Foreign Service and Civil Service employees, depending on the nature of the allegation. If an investigation suggests a possible disciplinary issue, the case is forwarded to the Bureau of Human Resources Conduct, Suitability, and Discipline Division, Office of Employee Relations (HR/ER/CSD). Similarly, when a bureau without delegated disciplinary authority or post management determines that misconduct by an employee warrants more than admonishment, they forward documentation to HR/ER/CSD for consideration of disciplinary action. HR/ER/CSD, which has eight staff members, receives about 240 referrals per year.

“Preponderant Evidence” vs “Beyond a Reasonable Doubt” Standard via State/OIG:

The “preponderant evidence” standard is used rather than the higher standard of “beyond a reasonable doubt” used in criminal cases.4 The Department is additionally required to establish a nexus between the disciplinary action and the promotion of the efficiency of the service.5 For both Civil Service and Foreign Service disciplinary cases, a proposed penalty is based on the review of similar past discipline cases and the application of the Douglas Factors…”

The Office of the Legal Adviser, Employment Law (L/EMP), and DGHR’s Grievance Staff, along with the Office of Medical Services, the Bureau of Diplomatic Security, OIG, DGHR’s Office of Career Development and Assignments, and domestic bureaus or overseas posts, as necessary, cooperate in developing a factual basis for a disciplinary case. HR/ER/CSD and L/EMP clear proposed disciplinary actions from the bureaus with delegated disciplinary authority that involve suspension, termination, or reduction in pay grade for Civil Service employees.

In the 2014 State/OIG report, HR/ER/CSD staff members acknowledge that timeliness is one of their primary challenges and that the case specialists are consistently unable to meet their performance target of 30 days from receipt of a complete referral package to proposal finalization. “The OIG team’s analysis of 891 discipline cases between 2010 and May 2014, for which timeliness data could be extracted from the GADTRK database, revealed that the average time from case receipt to decision letter was 114 days.”

Our source speaking on background elaborated that the reason State/DS has an adverse action list is because it takes so long for the Department to discipline employees, Diplomatic Security “needed a tracking mechanism.” (see Bureau of Diplomatic Security’s “Naughty List” — What’s That All About?).

How many is too many?

How long is too long?