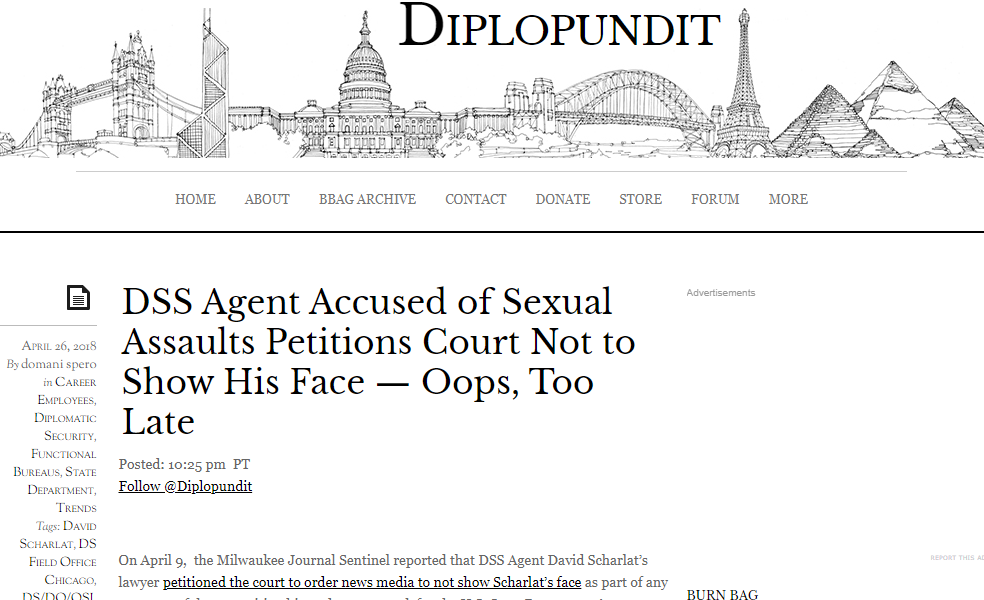 On April 9,  the Milwaukee Journal Sentinel reported that DSS Agent David Scharlat’s lawyer petitioned the court to order news media to not show Scharlat’s face as part of any coverage of the case, citing his undercover work for the U.S. State Department’s Diplomatic Security Service. Bucher withdrew the petition Tuesday after it was reported in the Journal Sentinel.

The Journal Sentinel’s Bruce Vielmetti reported that there was some confusion over Scharlat’s employment status:

In court Wednesday, Hulgaard noted that the State Department relieved him of all his duties, made him surrender his weapon and badge, and escorted him from a government building to his home in April 2015.

In an April 9 letter to Hulgaard, an acting deputy assistant secretary with the Diplomatic Security Service said Scharlat is presently employed, but that disclosure of his identity would not adversely affect any open case or investigation.

But wait, a State Department official also told the Journal Sentinel that Scharlat was hired in 2001 and “fired in April 2015.” Also this:

“The Department has zero tolerance for sexual assault and takes any and all allegations of sexual assault very seriously,” and has been cooperating with Waukesha County authorities, the official said in an email.”

Can they please get their story straight? He can’t still be “presently employed” and also “fired in April 2015.”

If he is still employed but has no assigned duties, it is likely that this is now an HR administrative case with appeals and whatnots. But three years on, and this admin case is still ongoing? How did Diplomatic Security and Bureau of Human Resources Conduct, Suitability, and Discipline Division, Office of Employee Relations (HR/ER/CSD) handle this case when one of the victims reported this case to the agency? How are all other cases handled? How many are there? Who keep tabs of these cases?

Isn’t it high time for State/OIG to look into the handling of sexual assault and sexual harassment reports at the State Department?  Or should we all write a daily email to our friends in Congress to get GAO to take a look?  Click here for our previous posts on sexual assaults and here for harassment.

State Department spokesperson confirms David Scharlat, charged in Waukesha County with raping three women over a five-year period, works for the department. Says he was hired in 2001, became a criminal investigator in 2010. Alleged rapes happened in 2012, 2013, and 2017.4:30 PM – Apr 2, 2018Twitter Ads info and privacySee A.J. Bayatpour’s other Tweets

MILWAUKEE — An agent who worked in diplomatic security protection for the U.S. Department of State is accused in Wisconsin of sexually assaulting three women with whom he was acquainted, according to a criminal complaint. David Scharlat, 53, pleaded not … https://t.co/ux3muy1RuD