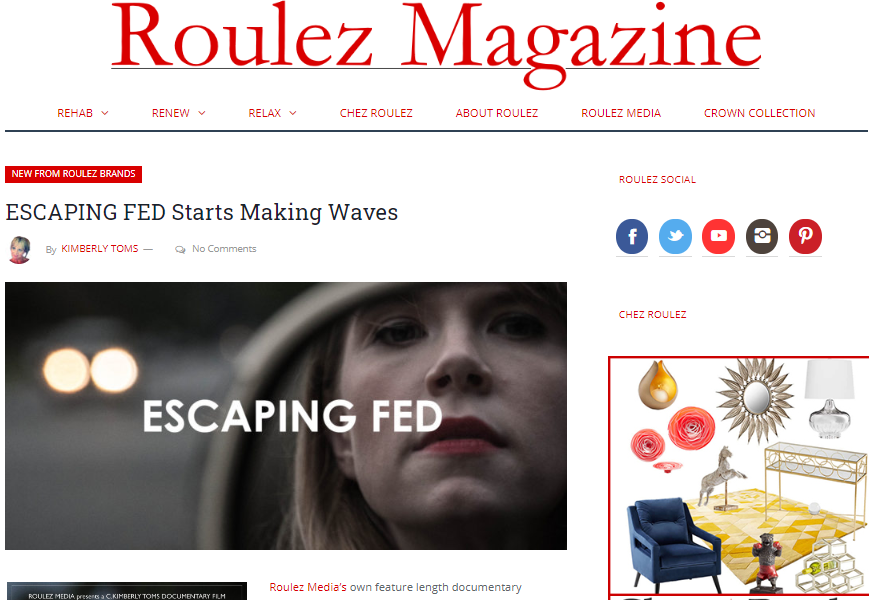 Roulez Media’s own feature length documentary film, ESCAPING FED, is making waves early in our film festival and awards programs efforts. In fact, we have already won our first laurel. At the same time, we gained entry as a contender in another festival awards program.

Our first laurel comes from the IndieFEST Film Awards, as an Award of Recognition for the Documentary Feature category. IndieFEST is an international film awards program. This program provides recognition and prestige to select productions out of a pool of thousands.

As the Producer-Director of ESCAPING FED, I am pleased with this initial laurel win. Achieving this early victory is so inspiring. Making the film was both a labor of love and a journey to healing from the crimes it portrays. But as a brand leader and filmmaker, you want so much to represent yourself and your brand as well as possible, regardless of the messaging you feel compelled to present.

From my point of view, I had to fulfill too many roles on this project, as the Producer-Director, Writer and Subject. This made my work more troublesome, as I was struggling to recover from my victimization and needle through the justice system at the same time. It was difficult to balance these efforts while trying to remain objective in our work. So seeing that public acceptance is there makes pushing the film forward even more rewarding and hopeful.

Our editor on this project, Nicholas Crawford, almost went through the crime trauma with me, as he dedicated hundreds of hours of hands-on work to create the final, finished product. In the last six months of this process, I regretted putting anyone through the work’s emotional roller coaster. It is something I hope to never have to repeat, whether in film or real life. But he achieved a much higher quality than I ever expected, given our budget and circumstances. So I am incredibly pleased and look forward to others seeing the results of his talents.

Onward and Upward for the Documentary Film

ESCAPING FED is just beginning film festival entries and efforts, as of March 2019. This process is followed by screenings, educational program Q&As and digital media roll out. Of course, you can learn more about this “little film that could” along its journey, here on RoulezMagazine.com.

Meanwhile, check out the ESCAPING FED film trailer below:

The IndieFEST Film Awards recognizes film, television, videography and new media professionals who demonstrate exceptional achievement in craft and creativity, and those who produce standout entertainment or contribute to profound social change. Entries are judged by highly qualified professionals in the film and television industry.

In winning an IndieFEST Film Award, Roulez Media joins the ranks of other high-profile winners of this internationally respected award including Liam Neeson as the narrator of Love Thy Nature, A Path Appears documentary featuring George Clooney and Blake Lively, Radical Grace executive produced by Susan Sarandon, a searing expose Davids and Goliath by Peabody winner Leon Lee and Touched with Fire starring Katie Holmes.