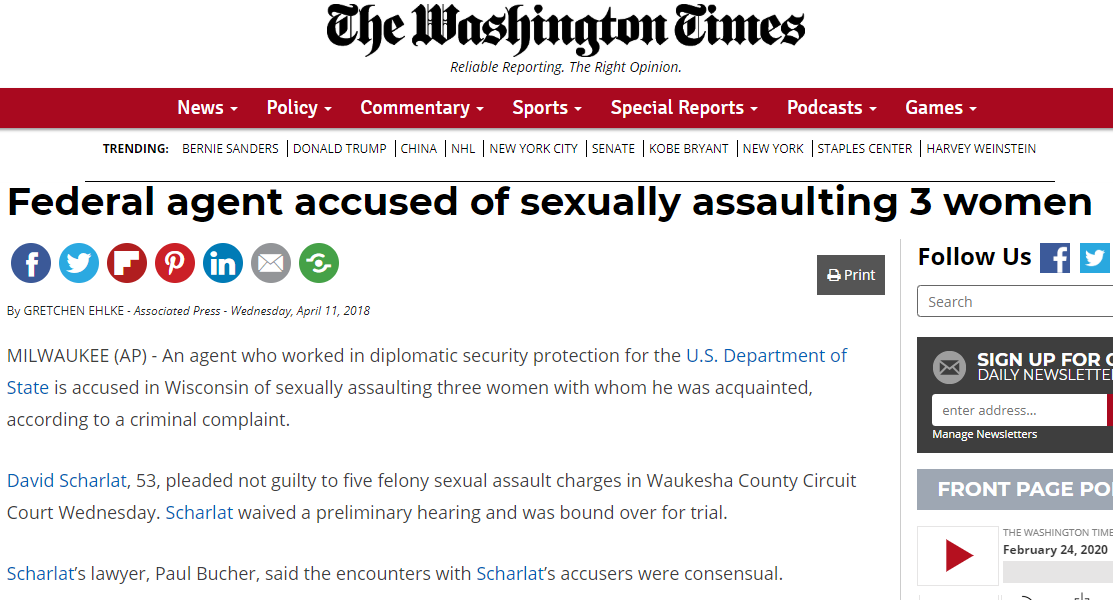 MILWAUKEE (AP) – An agent who worked in diplomatic security protection for the U.S. Department of State is accused in Wisconsin of sexually assaulting three women with whom he was acquainted, according to a criminal complaint.

“A lot of alcohol was consumed by all three women,” Bucher said Wednesday.

According to a criminal complaint, a 43-year-old accuser told investigators she was sexually assaulted by Scharlat twice, on Oct. 20, 2017, at her residence in Hartland and again Oct. 22, 2017 at an acquaintance’s house in the Town of Brookfield. In the first incident, the woman said the two began to have consensual sex that eventually became non-consensual after she told Scharlat to stop because he was hurting her, the complaint said.

In the second incident, the woman told police Scharlat forced her to have sex, causing injuries that later required surgery.

The complaint says a 50-year-old woman told investigators Scharlat always had his gun on him or on the nightstand or desk when he had sex with her and that he wore his badge around his neck and would dangle it in her face. The woman said Scharlat forced her to perform a sex act on him in June or July of 2012 and on Feb. 14, 2013 and had made threats over the years, including threats to hurt her, kill her or stop helping her financially.

The third woman, 48, said she met Scharlat in an online dating website in March 2013 and that after they started dating he became controlling and threatened to have her arrested because he was a federal agent, according to prosecutors.

Scharlat forced the woman to perform a sex act against her will on Aug. 31, 2013 at his residence in the Town of Oconomowoc, the complaint said.

The Department of State said in an email Wednesday that Scharlat was hired in September 2001 and was removed from access to the department’s facilities in April 2015. A state department spokesman, Ambrose Sayles, said that Scharlat remains an employee and that the department has cooperated with local authorities on the criminal investigation. The department declined to detail Scharlat’s duties, but Bucher said he worked in high-profile diplomatic security protection for the department.

Waukesha County is located 25 miles (about 40 kilometers) west of Milwaukee.