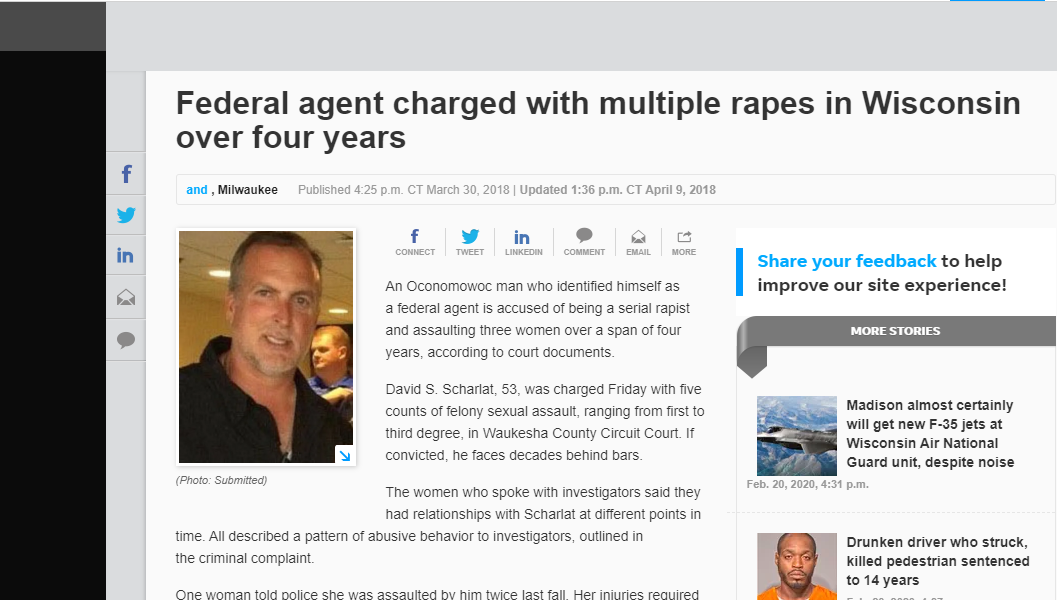 From the Milwaukee Journal-Sentinel

An Oconomowoc man who identified himself as a federal agent is accused of being a serial rapist and assaulting three women over a span of four years, according to court documents.

The women who spoke with investigators said they had relationships with Scharlat at different points in time. All described a pattern of abusive behavior to investigators, outlined in the criminal complaint.

One woman told police she was assaulted by him twice last fall. Her injuries required multiple surgeries.

Another woman described how Scharlat assaulted her and made “so many threats to her over the years, including that he would kill her.” She remembered his badge dangling from his neck, according to the complaint.

A third woman told investigators she met Scharlat online and said he was “her rapist and stalker.” She said when she mentioned moving, he responded that the “whole country” was his jurisdiction.

“Do you know who I am? I’m a federal agent,” she recalled him telling her.

Scharlat’s attorney, Paul Bucher, said the allegations were old, including some that had been dismissed at an earlier civil court hearing, and his client believes the alleged actions were consensual.

“He did not commit these offenses as charged,” Bucher said in an email. “We will aggressively defend these false allegations.”

Scharlat is an agent with the U.S. Department of State Diplomatic Security Services. On Friday, a spokesperson for the State Department could not comment on his employment status or the investigation.

Bucher would only say Scharlat “is on administrative leave as a federal employee.”

According to the criminal complaint, the investigation began last October when a woman called police to report two assaults.

In the first instance, she said Scharlat became “aggressive” during what had started as consensual sex and she begged him to stop hurting her.

The second assault occurred days later. The woman woke up in a bed bleeding with little memory of the night before.

She went for a sexual assault exam. The nurse documented numerous injuries. Scharlat’s DNA was found on her clothing.

Investigators believe the woman was too intoxicated to give consent the night of the second assault. When questioning Scharlat, he said she was not incapacitated, but then said she had trouble walking.

In an interview Friday, the woman said she and Scharlat had an earlier relationship and re-connected last fall. The woman asked not to be named, and the Journal Sentinel does not identify victims of sexual assault without their permission.

The woman said three years ago she was contacted by federal investigators who asked about her relationships with Scharlat.

They questioned her after another woman had come forward alleging domestic abuse by Scharlat, she said.

The woman said she believed Scharlat may have lost his federal position after that. Like the other women quoted in the criminal complaint, she said Scharlat abused the power of his badge.

“He let me know all the time that he was a cop,” she said.

The woman applied for a restraining order against Scharlat in November with Milwaukee-based Attorney Rebecca Coffee representing her.

“This has been a nightmare for my client since last October and she is very happy that the case is being prosecuted,” Coffee said.

Scharlat was issued a summons on Friday and is scheduled to make his first court appearance April 11.