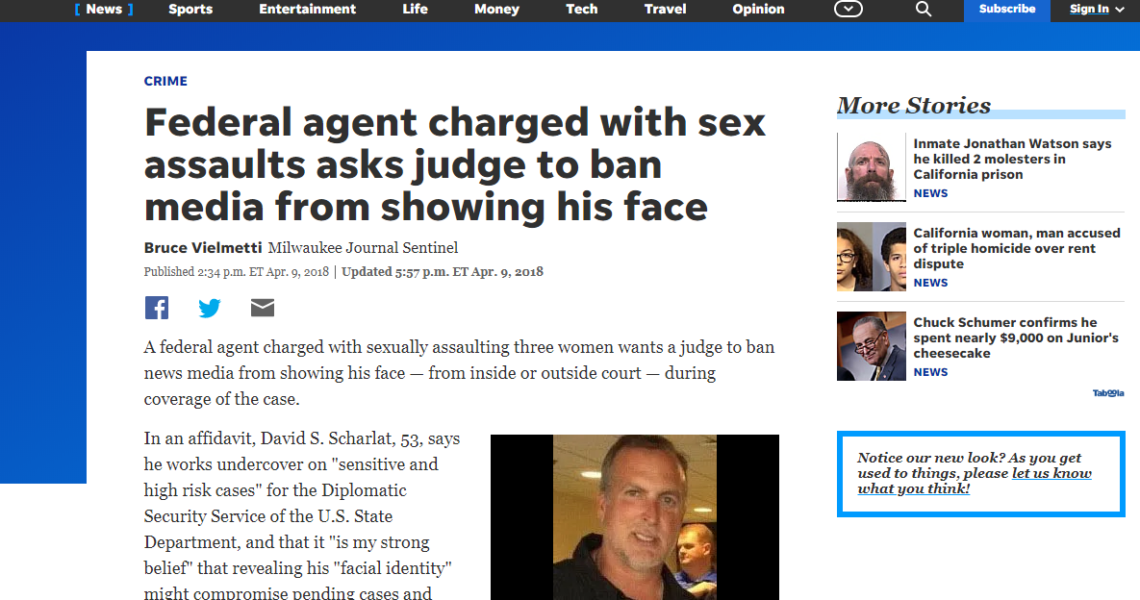 A federal agent charged with sexually assaulting three women wants a judge to ban news media from showing his face — from inside or outside court — during coverage of the case.

In an affidavit, David S. Scharlat, 53, says he works undercover on “sensitive and high risk cases” for the Diplomatic Security Service of the U.S. State Department, and that it “is my strong belief” that revealing his “facial identity” might compromise pending cases and endanger his safety.

Scharlat, of Oconomowoc, was charged in Waukesha County on March 30. His attorney, Paul Bucher, requested the news media restrictions last week.  Circuit Judge Maria Lazar had not yet ruled on the petition as of Monday.

The case is scheduled for a review of the petition on Wednesday morning, and Scharlat is set to make his initial appearance Wednesday afternoon.

Last month, the Diplomatic Security Service would not comment on Scharlat’s status with the agency, but Bucher said his client was on “administrative leave.”

The women in the criminal complaint say Scharlat assaulted them at a hotel, the home of a former Brookfield police lieutenant and Scharlat’s own home over a span of four years. The women told investigators that Scharlat reminded them he was a federal agent, and sometimes kept his gun and badge nearby during the assaults.

One of the women said she had been contacted by federal investigators about three years ago. She also sought a restraining order against Scharlat in November.

That filing was in regard to a visit to the area by Parkash Singh Badal, the Punjab chief minister. He was here for a wedding in summer 2012 when a gunman massacred worshipers at the Sikh temple in Oak Creek.

When Badal went to Oak Creek to meet with victims, a human rights organization tried to serve him with a federal lawsuit that claims he and other Punjab officials have violated human rights of Sikhs in India. Scharlat was assigned to Badal’s detail.

As recently as January, Scharlat and a former Brookfield police lieutenant, Jeffrey Schramm, were asked by the owner of the Hideaway Bar to leave the Oconomowoc tavern after several women patrons complained that Scharlat was “weirding them out,” according to a Town of Oconomowoc police report.