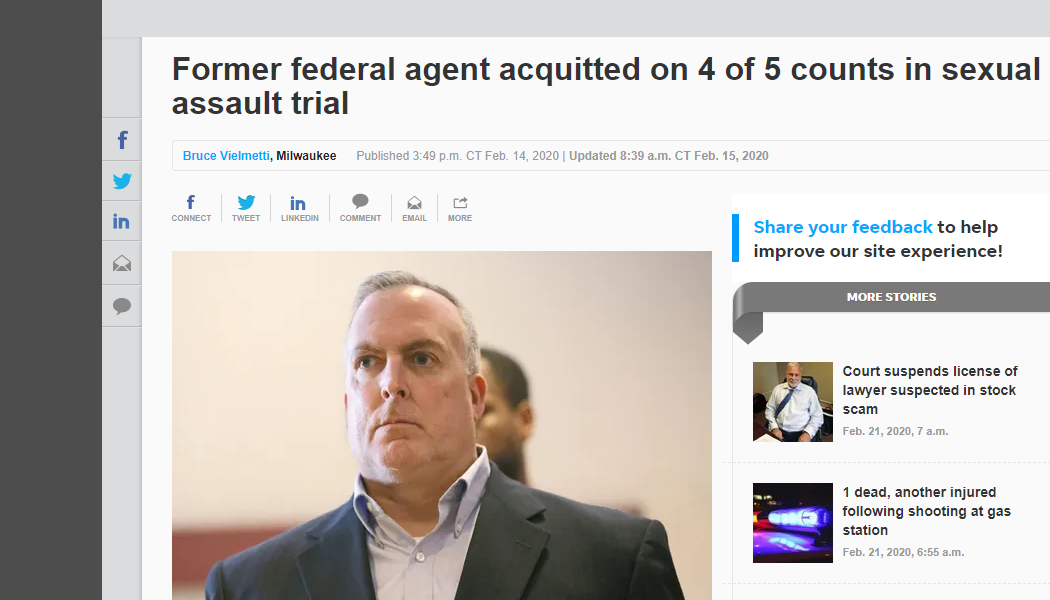 WAUKESHA – A jury late Friday found a former federal agent not guilty of sexually assaulting two women after a nine-day trial that featured explicit testimony from three former girlfriends, but guilty of assaulting a third.

David Scharlat, 55, of Oconomowoc, was charged in April 2018 with five counts of sexual assault against the three women over five years. Scharlat, who had steady dating relationships with all of the women, says the charged incidents were all consensual.

His attorney, Paul Bucher, called the conviction inconsistent with the other verdicts and said Scharlat will appeal. “The fight is not over,” he said.

In her closing argument, Assistant District Attorney Michele Hulgaard said the evidence showed Scharlat to be a predator who had no regard for the women in his life and took what he wanted from them, emotionally and physically. He used the authority of his badge and gun to intimidate them, she said.

She recounted the women’s emotional, explicit testimony, and reminded the jury of a domestic violence expert’s explanation about why victims stay in bad relationships and don’t immediately report abuse. Hulgaard pointed to how she said Scharlat exercised power and control over his girlfriends through threats, demeaning language, isolation and economic leverage.

In his closing argument Friday, defense attorney Bucher told jurors he was no longer referring to the women as alleged victims. “They are victims,” he said, “of the government. It used them as pawns.”

He attacked the case as wrongly charged, noting that the day before, prosecutors amended the most serious count — first-degree sexual assault causing great bodily harm — down to third-degree, meaning sexual intercourse without consent.

Bucher mentioned the dozens of times the women had willingly had sex with his client and suggested their claims of assault on the specific occasions didn’t make common sense. “C’mon. Seriously?” he said.

He asked the jury to acquit Scharlat, and quickly, to send a message to the government, “Don’t bring us this junk.”

All three women testified about their up-and-down relationships with Scharlat.

One woman said her relationship had gone on for 20 years, despite her constant fear of his volatile temper. The jury acquitted Scharlat on two counts involving that woman.

C.Kimberly Toms described meeting him after his persistence on a dating app, and how she later felt controlled, threatened and stalked and how he forced her to perform oral sex at his home over Labor Day weekend in 2013. The jury convicted Scharlat of second-degree sexual assault, with threat or use of force, on that count.

The next year Toms persuaded Scharlat’s employer, the federal government, to investigate him. When she felt nothing came of it, she made a documentary about her story, which became available on Amazon last month.

“I’m all at once shocked and incredibly pleased that the jury saw the truth of my testimony,” Toms said in an email.

“I feel this is a victory for all of the women he has hurt, both those involved in the case and those who were too afraid to come forward. I hope we can all move forward with our lives in more positive directions and put this behind us”

The third woman had reconnected with Scharlat in October 2017, three years after ending a three-year relationship, and then, she said, suffered two assaults in three days. She reported the incidents to police less than a week later. That investigation led detectives to the two other women.

Though she reported the assaults within a few days, she admitted to initiating sex with Scharlat in one instance, before asking him to stop, and testified she was so intoxicated during the second, two days later, that she had no specific memory of being assaulted, though she was sore and bleeding afterward. He was acquitted on those two counts.

Scharlat did not testify, or put on any defense, but jurors did watch a recording of his three-hour interview with a Hartland police detective in 2017, which prosecutors played.  In her closing argument, Hulgaard characterized Scharlat as arrogant, angry, demeaning toward his accusers and trying to take control of the interview from the female detective.

When he was charged, Scharlat’s exact status was unclear; U.S. State Department officials indicated he was on administrative leave from his job as a special agent with the Diplomatic Security Services.  He joined the agency in 2001 after working at the Brookfield Police Department. He said he was granted federal duty disability retirement in November 2018.

Two counts refer to incidents in October 2017, which the victim reported within a week. The first-degree count was amended after the forensic nurse said the woman’s injuries did not amount to serious bodily harm. It went to the jury as a third-degree charge, and the lesser-included offense of fourth-degree sexual assault if jurors found there was sexual contact but not intercourse.

The second count of third-degree sexual assault was for an incident in which prosecutors say the woman was extremely intoxicated after spending the evening with Scharlat and could not have consented to the sex they contend left woman with internal injuries.

Scharlat faces up to 25 years in prison on the single conviction, but would likely receive far less. He will remain free on GPS monitoring pending his sentencing in May.