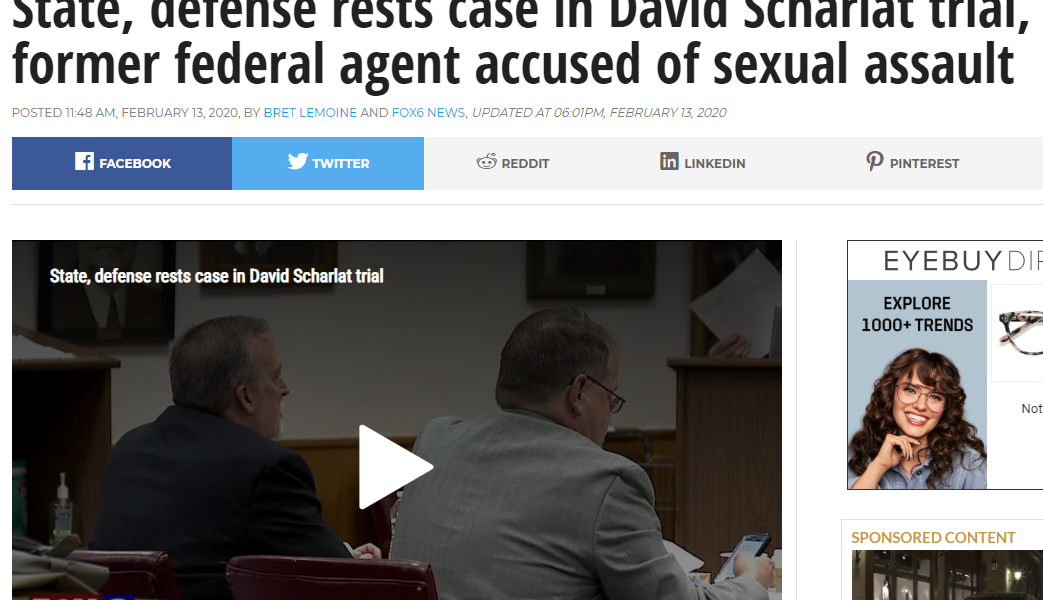 WAUKESHA COUNTY — Day 9 of the David Scharlat sexual assault trial, and an end is in sight.

On Thursday, Feb. 13, the trial wrapped up for the day by playing the last 40 minutes of a three-hour-long interview with police.

“I’ve got nothing to hide here,” Scharlat said.

The state rests its case in the trial. Scharlat is a former federal agent accused of sexually assaulting three women over a five-year period.

Scharlat, in the video, told police he and one of the alleged victims had an ongoing sexual relationship.

“To say I had unconsensual sexual relations with her is ridiculous,” said Scharlat.

The interview was the only time the jury heard from Scharlat. In fact, the defense isn’t calling any witnesses. Late Feb. 13, the court prepared for jury instructions.

Scharlat worked as a diplomatic security service agent for the U.S. Department of State. The 11-page criminal complaint outlines in graphic detail each of the alleged incidents. Prosecutors said he used his position to intimidate women.

The most recent allegation happened in a home in the Town of Brookfield in October 2017. Prosecutors said Scharlat took his ex-girlfriend back to a mutual friend’s house after a night of drinking. According to the complaint, that friend told investigators he told Scharlat “no funny business tonight.” The woman told investigators she woke up bleeding and believed Scharlat raped her. A sexual assault examination confirmed the injuries, the complaint indicated.

After the most recent alleged victim came forward, two other women reported assaults in 2012 and 2013. One of the women said Scharlat assaulted her multiple times, including once in an Oconomowoc hotel, saying he would “dangle his badge in her face.” The other alleged victim said Scharlat raped her at his Town of Oconomowoc home. She said he threatened her, asking, “Do you know who I am? I’m a federal agent.”

One woman told police Scharlat was “aggressive” and that he “forced himself on (her).” The victim allegedly told investigators that intercourse became “non-consensual” as she screamed at him: “Please God, stop!”

The defense made several attempts for a mistrial and dismissal of all charges. For two hours before jurors heard any testimony, the defense tried to strike a forensic scientist’s testimony given the day before. The defense also tried to stop a domestic violence expert from taking the stand Wednesday — citing Scharlat was never charged with domestic abuse.

The trial itself led to many arguments when the jury was not present. The court originally anticipated the trial would last until at least next week Tuesday, Feb. 18. The jury will receive the case Friday, Feb. 14 after closing arguments.

If convicted on all counts, Scharlat could spend the rest of his life behind bars.