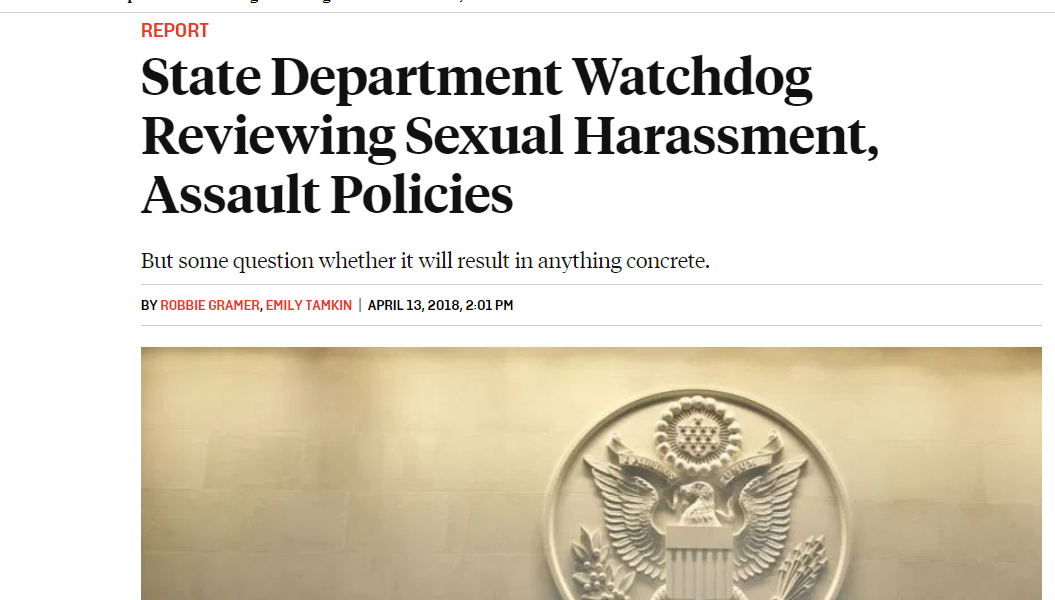 But some question whether it will result in anything concrete.

The State Department’s internal watchdog is reviewing the handling of sexual harassment and assault cases, bringing a new level of scrutiny to a part of the federal government that has long struggled with the issue.

A spokeswoman for the State Department’s Office of Inspector General confirmed it started evaluating how the department handled allegations of sexual harassment and assault in February. The review follows months of increased attention from lawmakers and a sharp uptick in media coverage of sexual harassment and assault in the federal government, including Foreign Policy’s own investigation into the State Department’s handling of the issue.

The spokeswoman says the evaluation is still “in an early stage,” but focuses on the frequency of harassment and assault, the procedures to investigate reports and discipline employees, and the roles of the department’s Office of Civil Rights, Bureau of Human Resources, and Bureau of Diplomatic Security.

While several officials welcomed the attention of the internal watchdog, others are skeptical the inspector general’s evaluation can bring meaningful reform.

“I don’t have much faith in their ability to effect change,” says one former State Department official. “A number of people have been afraid to report stuff to the [Office of Inspector General] … I don’t trust their ability to protect sources.”

“The OIG takes very seriously its responsibility to protect all sources,” the OIG spokeswoman writes in response. “We routinely provide State Department employees with confidentiality, if requested.”

A current State Department official, speaking on condition of anonymity, expresses concern that a review wouldn’t result in any concrete actions or reforms. “It is well known that even when the [Office of Inspector General] investigates and makes recommendations, including disciplinary action against senior employees, that enforcement and implementation of those recommendations is, at best, lackluster,” the official says.

The move by the inspector general’s office follows a groundswell of public attention to sexual harassment and assault following the rise of the #MeToo movement. The State Department in particular has faced pressure from lawmakers and former officials to address the issue.

Among the the most vocal proponents for change is Sen. Jeanne Shaheen, a Democrat from New Hampshire who is the only woman on the 21-member Senate foreign relations committee.

Late last year, over 200 current and former government officials and experts in the national security community signed a #MeToo letter highlighting the prevalence of sexual harassment and assault in their field.

A State Department spokesperson insists the department takes allegations of sexual harassment and assault “very seriously,” from the highest levels including acting Secretary of State John Sullivan. “Department policy is that there is no tolerance for sexual and discriminatory harassment,” the spokesperson says.

Before he was fired last month, then-Secretary of State Rex Tillerson said addressing sexual harassment and assault was one of his top priorities, even mentioning it in his final press conference.

A probe by the Office of Inspector General could bring new levels of scrutiny to how State handles reports of sexual harassment or assault and result in tangible, though nonbinding, recommendations on how State can reform its bureaucracy. The inspector general’s recommendations will go to congressional oversight committees.

One issue is with the current reporting procedure. In criminal cases of harassment and assault, the accuser or office of civil rights reports to diplomatic security. What happens next varies from case to case. But in cases where the perpetrator is from the bureau of diplomatic security, would-be accusers can be unsure of where to turn, current and former officials tell FP.

Last month, a State Department Diplomatic Security Service agent, David S. Scharlat, was accused of serial rape and charged in a Wisconsin court of five counts of felony sexual assault. The Milwaukee Journal Sentinel, which first reported the case, said Scharlat was based out of the State Department’s Chicago field office.

The State Department spokesperson says Scharlat, who started working for the department in 2001, is still a federal employee, but the government had “suspended his law enforcement authority and his ability to access Department facilities” in April 2015.

Scharlat’s attorney, Paul Bucher, told FP in an email his client will contest the charges.