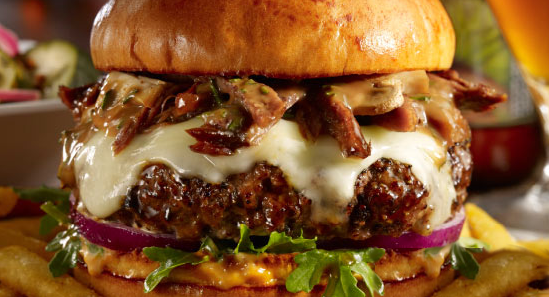 Super Bowl 50 is coming and with it, the annual scramble for the best finger foods. Of course, burgers are always part of the quintessential Super Bowl repertoire. Wherever you are in the country and whichever team you root for, you know you love a good burger.

There is no watching your waistline on Super Bowl Sunday. Along with Thanksgiving, Easter and Christmas dinner, this particular Sunday is calorie-consciousness free. That becomes apparent in the choices below, with eight burgers listed for you to try, two for each quarter of the big game. But you better get warmed up and stretched out before going in.

For Sobelman’s Pub and Grill in Milwaukee, using fresh Black Angus beef was not enough for the founder’s burger dreams. Oh no. For Dave Sobelman, there had to be much more before his Super Bowl-worthy concoction was complete. The recipe includes a Bloody Mary, well-stacked cheeseburger slider and – apparently – whatever else the kitchen decides to throw into the mix. Sobelman’s Cheeseburger Bloody Mary is one of their most popular sellers for the pub and we can see why.

“People tend to want different creations and the more creative, the better,” Dave said. Other popular burgers include the “Hangover,” consisting of Colby-jack cheese, smoked bacon, butter-fried onions and a fried egg.

Hands down, Sobelman is our new favorite Dave in Wisconsin.

Based in St. Paul but with 28 locations in the U.S., Champps features a juicy mouthful of all-American goodness. Yes, we just said that. You’ll say it, too, after taking a bite of their Short Rib Wagyu Burger. Built with grass-fed Wagyu beef topped with braised beef short rib, mushroom gravy, melted cheese, hot sauce aioli, arugula and red onions, this burger definitely fills the stomach delightfully.

The Hard Rock Cafe started in England over 40 years ago, but was co-founded by a Tennessean wanting to spread the love of Southern style American cuisine. Each of the Hard Rock’s locations feature menu “Local Legendary” variations, but the Orlando Modelo Especial Bacon Cheeseburger should be present on every menu. This burger is crafted using certified Angus beef drizzled with Modelo Especial beer-infused cheese, topped with applewood smoked bacon, grilled poblano peppers, garlic aioli, lettuce and tomato on a brioche bun. Best served with a Modelo Especial beer, of course.

Started in 1986 by a fashion retailer, Johnny Rockets is headquartered in Aliso Viejo, CA. But it has 340 locations in 26 countries, meaning you should not have too much difficulty finding a Big Pastrami Pretzel Burger near you. This burger is an all-beef, farm-to-table patty topped with grilled pastrami, provolone, caramelized onions, all-American yellow mustard and sliced pickles, served on a soft pretzel bun.

During the Super Bowl, the sports fan cliché is that of the wife or girlfriend being an unwelcome distraction in a den of men. Of course, that is not the reality.

But if you do have problems with a hanger-on when you just want to watch the game, then take a lesson from Crave Real Burgers of the Denver area. Munch down on one of their Love Stinks burgers and the sweetie will steer clear until well after the final score. Armed with this fragrant burger, you have an excuse for avoiding intimacy and paying attention to the referee.

Jeff Richards, chef and co-owner of the burger restaurant chain claims, “We roast the garlic, squeeze it out of the cloves and mix with the cream cheese so it’s not overpowering.” He swears, “You can still smooch your sweetie after eating the burger.” Given its name, we don’t believe him.

When it comes to traditional American cuisine, it is a given that anything from the South will likely stick to the ribs. So this macaroni and cheese-dressed burger from Back Yard Burgers of Tennessee should be no surprise. It delivers exactly what you look for when turning eyes southward.

The Bacon Mac & Cheese Burger features a beef patty topped with bacon, white cheddar macaroni and bacon jam. The jam is made with bacon, caramelized onions and sugar.

Just in time for the Super Bowl, Mooyah Burgers is putting their Diablo on the menu. Is the burger named after the devil because the Cowboys will not be playing the big game? Let’s hope it is not representative of a curse, because this fiery burger will taste oh-so good going down.

The Diablo is made with two beef patties, pepper jack cheese, bacon, jalapeno, mayonnaise, and — just to turn up the heat — hot sauce. All of this is served on a heavenly soft artisan white bun.

The Fritter Burger from San Francisco’s E & O Kitchen will not be winning any beauty pageants. But burgers are meant to taste good and this one delivers that. It also provides a unique texture that made it a favorite in the home city of the 49ers.

The Fritter Burger is topped with house made corn fritter, kimchee, pickled cucumbers and hot sauce aioli. According to the executive chef of E & O Kitchen, Sharon Nahm, “It’s salty, it’s crunchy, it’s a little sweet from the corn. The combination of flavor and texture made it a hit.”