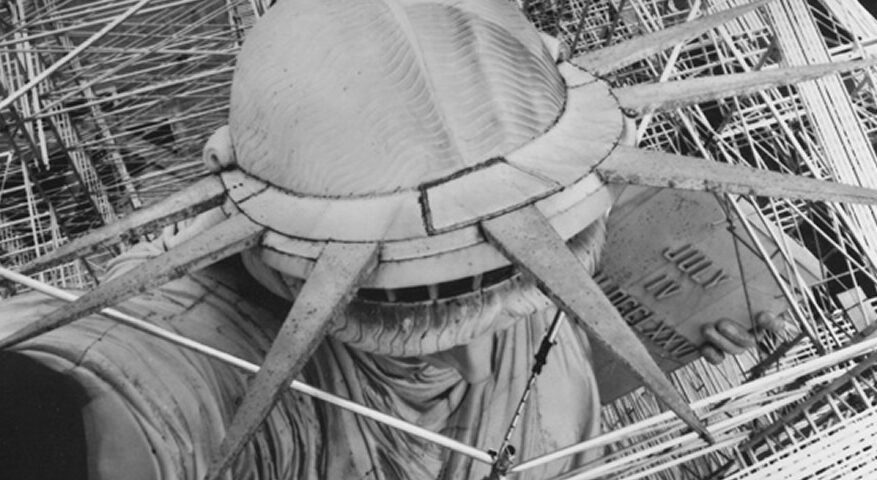 Up for Auction: The Voice of Lady Liberty | An Ego-Crush for Hitler | Roulez Magazine

It was 124 years ago that 15 year-old Annie Moore of Ireland stepped onto Ellis Island and through the immigration processing area there to become an American, the first to be processed into the country through Ellis Island’s new facilities. Over the next 60 years, about 12 million more immigrants passed through the island’s gateway into the United States. One million of those souls immigrated on Ellis Island in 1907, alone.

Only five years prior to Annie’s arrival from County Cork, the Statue of Liberty made her journey from France to New York Harbor. This long journey was completed with final unveiling of the erected Lady Liberty atop her poured concrete and granite pedestal in October of 1886.

A Voice for Lady Liberty

Emma Lazarus, an American born poetess living in New York and witnessing firsthand the fanfare surrounding Lady Liberty’s commissioning, arrival and final erection, penned a poem called The New Colossus. Her words personified the statue, putting phrases in the Lady’s mouth as she likely would have spoken. Amazingly, the sonnet was written two years before the statue even arrived in New York, despite its seeming to have been generated while gazing upon her.

The most famous lines of that poem are ones we all grew up hearing in American classrooms: “Give me your tired, your poor, Your huddled masses yearning to breathe free, The wretched refuse of your teeming shore. Send these, the homeless, tempest-tost to me, I lift my lamp beside the golden door!“

Sadly, Lazarus died 15 years before her poem was inscribed at Liberty’s feet for all to see as they gaze up at the copper beauty from her pedestal. The poetess was only 38 when she passed away, yet was becoming a highly vocal, thought-provoking and modern woman in a time when most Victorian females were growing more concerned with inspiring the ditching of corsets. Lazarus’ own concerns were not of corsetry. She was more focused on immigrant and minority treatment in their homelands and after arrival in the United States.

During her final years, Lazarus worked for the Hebrew Immigrant Aid Society, as part of which she personally witnessed about 2,000 Russian-Jewish refugees arriving monthly in New York. Moved to push her ideals further than just within her workplace, Lazarus wrote An Epistle to the Hebrews, a suite of 14 essays which later appeared in a newspaper as part of a weekly series. That newspaper, The American Hebrew, was published by Philip Cowen. In 1900, 13 years after her death, Lazarus’ series was again published in book form by the Federation of American Zionists. According to Lazarus’ Princeton biographer Esther Schor, the poetess was the first well-known American to publicly make the case for a Jewish state in Palestine.

Emma Lazarus was a seemingly unafraid advocate of her people and all of those coming into the United States from places where they were downtrodden and poorly treated. She believed in America and used her pen to assert all of her beliefs. Sadly, she was more appreciated for her words posthumously. It surely would have stirred her quite a bit, to see her poem’s placard at the base of the Statue of Liberty. She likely could have accomplished even more for liberty and her people, had she been blessed with a longer life.

On the 22nd of May, presumed to be sometime between 1883 and 1887, Emma Lazarus wrote a letter to her newspaper friend, Philip Cowen. In that letter scrawled on eggshell-cream letter sheet in sapphire blue ink, Lazarus asked Cowen if he believed timing was right for his newspapers’ republication of her 14 An Epistle to the Hebrews essays. Cowen apparently believed timing was appropriate, as he seems to have been the one who wrote a quick, “OK” on the reverse of the letter.

Cowen, himself, later expanded his work in immigration. In 1905, President Theodore Roosevelt appointed Cowen Immigration Inspector on the Board of Special Inquiry. The next year, Roosevelt “commissioned him to travel to Russia to examine the conditions that spurred large mass migrations to the United States and to investigate reports of pogroms [organized massacres of ethnic groups]. Cowen reported that the Russian government was responsible for the pogroms, by encouraging officers through promotions and other benefits to partake in such massacres,” according to the American Jewish Historical Society’s Guide to the Papers of Philip Cowen.

Emma’s exact words in her 1880’s letter to Cowen were, “Do you think any good might be effected by re-publishing in pamphlet form my ‘Epistle to the Hebrews?’ I have been looking it over, & think if it were put together & perhaps partially revised, it might arouse true thinking interest. Please let me know what you think of it, & believe me, Very truly yours…”

At the bottom of the letter, she did what people do in such circumstances. She signed her name. That simple act of signature is now what makes this letter worth somewhere between $22,000 and $32,000 at auction. This high price is due to the scarcity of Emma’s name written at her own hand, largely because she died so young.

Researcher Bob Snyder of Cohasco, Inc. states that Lazarus’ autographic material is rarely seen on the market. It is one of the most elusive nineteenth-century American autographs, due to her death at just 38.  “The letter suggests the bedrock for modern American immigration policy,” Snyder says.

The Emma Lazarus-signed letter is being auctioned on January 5, 2016 by Cohasco, Inc. of Yonkers, New York.

Perhaps one of the greatest ironies of 2016 to date – and maybe even the year – is that Lazarus’ autographed letter, as penned by the strong female advocate of Jewish people, Palestine and immigration, is up for auction alongside an autograph of the worst individual in Jewish history, Adolf Hitler.

At the same time as Lazarus’ letter is being placed on the block for an expected amount of more than $22,000, a 1933 Hitler-signed copy of Mein Kampf, perhaps the most notorious book in modern history, is expected to bring in bids of only around $5,500 to $7,000.

Of course, one can argue that Hitler’s signature is more prevalent in collectors’ circles — as the man loved to affix his signature far and wide — and thus his penned name is fetching a lower expected bid. But, as auction spokesman Bob Snyder put it, “The author isn’t signing them any more. Autographed copies, especially with provenance, are in strong demand.”

Snyder remarked upon the authenticity and unique nature of this version of Hitler’s signature by saying, “Hitler’s signature was also printed under his portrait. That facsimile is frequently mistaken for an authentic autograph. The book offered here bears a true signature, authenticated by the late H. Keith Thompson, Jr., partner of the most famous autograph dealer in America in the last century, renowned for their Waldorf-Astoria sales.”

The autographed book is also accompanied by Mein Kampf’s first complete American edition. Published in 1939, its publisher notes in the foreword, “Now for the first time available in complete form to the American reader…Crises…have awakened the American public as never before to the seriousness of the world and to themselves of the Nazi program…There are undoubtedly passages of great importance, which now appear in English for the first time.“

Regardless of where one stands politically regarding such matters as Hitler, immigration and Palestine, it is just a little bit fun to imagine the fury the Fuhrer might emote, if he could tell us his thoughts on the valuation and presentation of his work within the same auction field as Lazarus’.

Emma Lazarus, being so eloquent with her words about injustice of ethnic groups and particularly her own Jewish people, would likely top that, too — with fewer words written and a quick signature beneath.

You can browse through all of the interesting historic artifacts of the January 5, 2016 auction collection at CohascoDPC.com.

Established 69 years ago, Cohasco is a dealer and auctioneer of historical documents, manuscripts, books, antiquarian materials and collectibles. As part of their own history, they have handled the sale of numerous prominent collections within a range of fields, from colonial to Confederate, Medieval to modern. Past highlights included the lamps that illuminated Lincoln’s wedding; an archive of America’s first “mass-produced” automobile, the Duryea; and the Bible owned by Martin Luther King, Jr.’s mother, setting a world record price for a twentieth-century Bible.