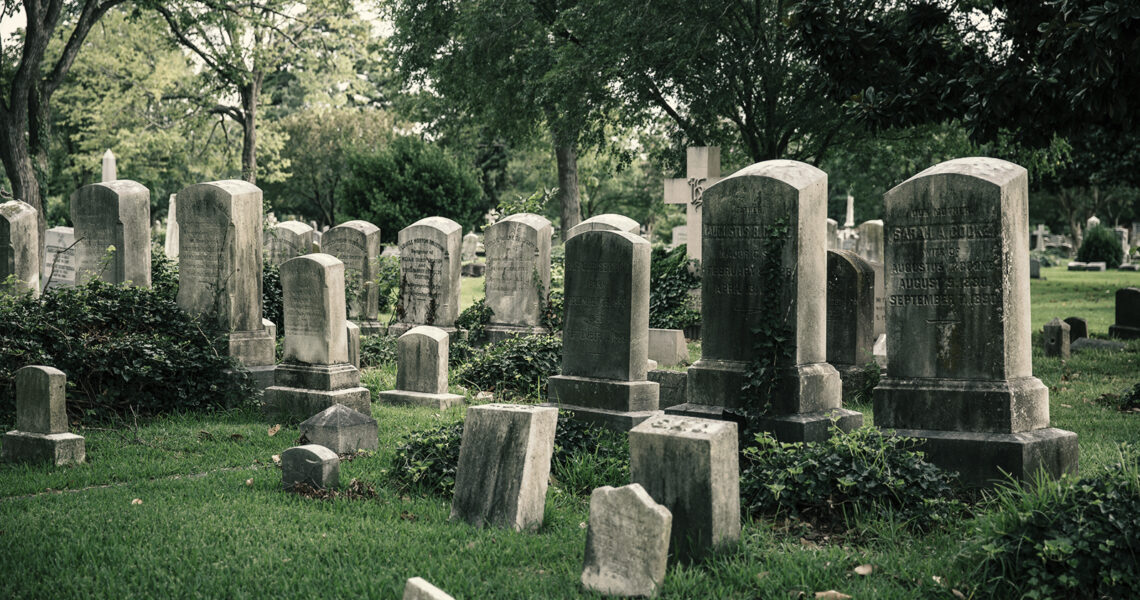 Burial Beauty In the Eyes of the Beholder | Roulez Magazine

Roulez photographer Nicholas Crawford and I recently ventured into Virginia cemeteries on the hunt for unique sculptural representations of life and death. Our original goal was for capturing imagery for Halloween and other purposes. But in addition to coming away with pretty photos and shadowy landscapes, we emerged with big questions about our own burial choices. Now, we also have a few thoughts about the real nature of hauntings occurring in our cemeteries.

All photos by Nicholas Crawford, unless otherwise noted.

Burial Vaults as Varied as the Beliefs Within

Our questions started as we ambled through one Hampton Roads, Virginia cemetery, where I boasted some newly-acquired knowledge about burial ovens. Despite being from New Orleans, I had never heard the term “oven vault,” as opposed to “wall vault.” I just assumed a vault is a vault. But in my Virginia cemetery research, I learned that Virginia burial ovens, or oven vaults, are commonplace. Although most are not as ornately constructed like those of New Orleans, they essentially house deceased families together in the same manner.

In Virginia Beach, Virginia, we visited Old Donation Church of 1694 and its surrounding cemetery. Adjacent to the church building is a wall vault. Most towns and cities across America feature a cemetery with one or more of these types of vaults from eras throughout our collective history.

Of course, when real estate ownership feels important in the afterlife, one can certainly opt for a family mausoleum or tomb. In Virginia cemeteries we have explored, mausoleums differ widely. They range from mainstream brick and mortar to styles a bit more intriguing. Some tell intriguing stories of the people within.

One of my favorite types of graves is the ledger stone.  Whether topping an in-ground tomb or an above-ground encasement, I love the stories these stones tell, often from as far back as the early 18th century.

On Jamestown Island, the Travis family ledger stones are among my favorites. Tucked into a forested home site, the family plot relays details of generations of fathers, mothers, sons, daughters and in-laws.

At Historic Christ Church of 1732 in Lancaster County, Virginia, the Carter family lies above ground but beneath ledger stones. Inside the church, at least one ledger stone grave within the floor tells of the soul buried there. Similarly, a ledger stone in the floor of Old Donation Church speaks of a considerate pastor.

Of course, the later version of the ledger stone is the vertical headstone. Through Victorian times, these proved a bit more verbose and descriptive than headstones of today. From stories of occupations and generations, these markers have evolved to merely communicate birth dates, death dates and sometimes a personal motto.

For vertical headstones, the Victorian era was particularly intriguing. These ultra-thin markers stand as tall as three or four feet from the ground, seemingly defying the laws of weight, natural forces and gravity over the course of time.

Choosing to use images instead of words, one couple’s headstones in Brandon, Virginia provide photographs of the lovers as they were in youthful Sunday finery.

A Symbol of Faith

Some people prefer simplicity, choosing a cross or other religious symbol as a grave marker for themselves or the people they love. Despite being simple, these markers also offer great diversity. A massive steel cross looms over one 20th century grave in Norfolk with hand-etched Revolutionary-era slabs visible in the distance across the churchyard. But not all crosses are limited to two straight lines that intersect. Yes, even a simple cross is open to interpretation.

Angels, Cherubs, Obelisks and the Grave as Art

Some of the most striking cemetery imagery stems from the incredible art you find in almost any burial ground. Headstones often depict beautiful etchings. But ornate statues in marble, stone and metal prove even more impressive. Many show an occupation, affiliation or faith. Others speak of the loved ones left behind and their grief, more than the people buried beneath.

The United States has over 200 federally established military cemeteries. Beyond these, every state has its own veterans’ burial grounds. Likewise, military bases and forts had their own. Municipalities also often provide plots designated for veterans of the Armed Forces.

Across Hampton Roads and in the River Realm of Christ Church we discovered many soldier stories as told through headstone epitaphs and the wars in which they served. We explored Revolutionary War graves, War of 1812 casualties, Confederate burial grounds, Union cemeteries and military cemeteries of the modern age.

Those Who Served and Burial Stories that Haunt

In some cemeteries, we had the uncomfortable experience of exploring war graves adorned with freshly-placed Confederate flags. As each flag gently waved in the breeze, we struggled to rectify the “mere soldier’s” role with his inferred beliefs and loyalties.

Being from a cotton plantation heritage dating from the early 1600s to the 1980s, I personally struggle with the ramifications of my forefathers’ presumed beliefs and actions. I live consciously aware of the gravity of their misguided ideals.

These are some of the darker stories inferred by cemeteries, some of our most remarkable historical repositories. Perhaps cemeteries do not really exist for the dead. They tell the tales of lives lived, in all of their glory, triumphs, misdeeds, mortal sins and failures. So, in some ways, maybe graves and their markers are designed more to inform, educate and even haunt those who live.