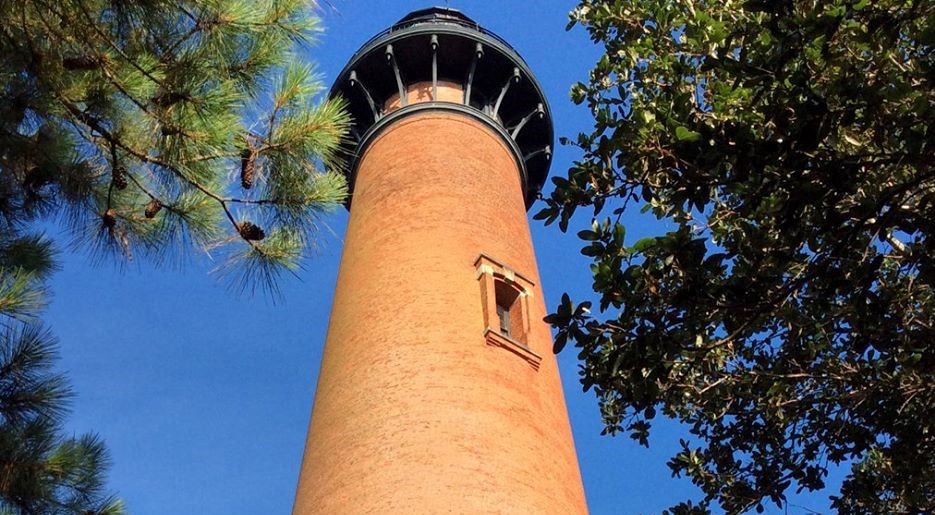 Lighting the Way: Lighthouses Into our Souls | Roulez Magazine

Roulez Media’s Nicholas Crawford and I went on an adventure last week. We decided to drive to Manteo, North Carolina to take in some of my favorite coastal sights down there, namely the Elizabethan Gardens of Manteo, Roanoke Marshes Lighthouse, Bodie Island Lighthouse and Cape Hatteras Light.

We have explored Currituck Light in the recent past, so we decided to leave a revisit for another day. But if you have not been to any of these lighthouses, I believe the interior and views from Currituck to be among the most beautiful.

So off we went, Nicholas and I. We were very excited to get away from “the office” for a bit, despite doing so on a full day of thunderstorms. After all, lighthouses exist to show you the way in a storm, do they not?

What Is the Attraction to Lighthouses?

As I sit down now to write this piece, I must question myself about my apparent lighthouse fascination. Why do these structures draw me in so easily? Why in the past several years have I visited so many, including the Portland Head and Nubble Lights of Maine, Point Retreat in Alaska, Point Reyes of Northern California and St. Augustine Lighthouse of Florida?

Of course, living in the Chesapeake Bay area, I guess one could say I frequent Cape Henry, Old Point Comfort, Currituck, Cape Hatteras, Roanoke Marshes, Bodie and Ocracoke Lights. Oh — and how could I forget Presque Isle in Erie, PA and Port Washington with its Breakwater Light in Wisconsin?

Now that I list these, I realize I have dragged Nicholas to Old Point Comfort, Cape Hatteras, Bodie, Roanoke Marshes and Port Washington lights in just the past eight months. Poor guy.

It appears I might have an undercover obsession. Or do we all find ourselves drawn to things that light our way? Does anyone not like a great lighthouse?

I think the answers to these questions shine through my recent awareness of how almost every photo I took over the course of a difficult three year period focused my lens on trails, paths, landscapes and boardwalks ahead of me. All of these images are relatively void of people and consist only of what lies ahead. In essence, I was drawn to a brighter, happier and more fulfilling future, the one one “out there” and “ahead.”

Likewise, I enjoy a great light. Show me the way, honey. With my troubles over, I am coming in for a landing and need to do so in safety.

I have been to Bodie Island Light at least four times. But it never fails that I say its name incorrectly. I struggle to say “body” as it is pronounced. I will fail at this for years to come, I am sure. It seems a morbid name not befitting such a lovely place.

Still, Bodie Island Lighthouse is one of my all-time favorites in the United States, as she is well-appointed in her striped suit as iconic as the best Chanel, ready for a show. It seems you cannot take a bad photo of her. She stands so svelte and tall over a lush North Carolina landscape of green grasses, autumn-colored wetlands and Nags Head beaches just beyond view.

The thunderstorms of our visit hit their peak right before our arrival. So the lighthouse was not open for a climb. But can one really be sorry, when she presents so magnificently in so many other ways?

Nicholas and I spent a solid half hour hanging over the nearby wetland boardwalk railing, watching the largest crabs I have seen outside of Alaska crawl beneath the water’s surface. Fish jumped out of the water and waterfowl displayed their plumage. Bodie Island Light Station is a veritable safari of wetland creatures.

And then, there is the light. It was October 1, 1872 that Bodie Island Light first flickered across the ocean waves. But she is actually a third generation model for this part of the coast. Her predecessors included a poorly constructed light that opened in 1847 and dimmed for the last time in 1859, due to a mean tilt.

The second version was blown up by the Confederates in the Civil War to prevent the obvious strategic advantage it could provide Union troops. Nevertheless, the current iteration stands solidly, straight and fully unionized as it has for almost 150 years.

As for the Currituck Lightkeepers of the past, Bodie Island Lightkeepers led lonely lives. Although the location is easily accessible today, it once topped a vast wilderness. Nearby Manteo on Roanoke Island was only accessible by boat.

After 1932, the light operated exclusively on electricity, as it does today. The National Park Service took over ownership and maintenance in 1953. Renovations recently completed in 2013, keeping Bodie Island Light as beautiful and operational as ever, as she continues guiding mariners safely across the Graveyard of the Atlantic.

Bodie Island Lighthouse offers self-guided tours to the top, where you can take in breathtaking freshwater, beach and ocean views from the third Friday in April to Columbus Day in October.

Cape Hatteras Lighthouse, also iconic in its black and white stripes, stands about 43 miles due south of Bodie Island Light. Also like her not-so-distant cousin in Nags Head, Cape Hatteras stands watch above the Graveyard of the Atlantic. She reigns where her predecessor less effectively lit its torch from 1803 to 1870.

The Outer Banks suffer rapid beach erosion and this changing landscape threatened Cape Hatteras’ integrity in 1935, only a year after she was electrified. Waves crashed against her base. The Bureau of Lighthouses decommissioned her and transferred her to the National Park Service shortly thereafter. Apparently not ready to resign her role over Diamond Shoals and the famed Graveyard, the light shone again when reentered into service by the Coast Guard in January 1950. Her beaches had returned to stability at her foot.

After 10 more years of noble service, the light’s keepers sought to stabilize her eroding grounds once again. This battle against the elements continued for more than 20 years, until the 1980s. In 1999, engineers moved the entire 198.49 foot structure 2900 feet to her new place beyond the dunes.

Today you can climb Cape Hatteras Lighthouse, just as we did. Taking the steps on in 97-degree heat index was only slightly uncomfortable. But that was in August, after all. The 257 steps that visitors climb to just below the lantern room are not difficult for the hearty and feature landings at every 16 to 31 steps, where you can catch your breath, if needed.

Of course, the top makes the climb worthwhile, as you reach cool ocean breezes and take in incredible views. I have an intense fear of heights, but found the platform accommodating and not intimidating.

More a photo op than a history lesson, Roanoke Marshes Lighthouse on Roanoke Island and in downtown Manteo, NC provides a classic, picturesque waterscape. This replica of the original 1877 working lighthouse provides a lovely outing, despite lacking in weather-worn authenticity.

Disrepair, Confederate soldiers, shipworms, sinking marshes and the waves of the sound during relocation have claimed the three predecessors of this little beauty. Still, no trip to the Outer Banks feels complete without a journey down her boardwalk or to the feet of her Bodie Island and Cape Hatteras comrades in light.

Returning Home in the Dark of Night, Lights at our Backs

After our Outer Banks visit and at the end of a very long day, we returned to Virginia feeling fulfilled. Dare I say we felt “enlightened?” At the very least, this journey to a quarter-dozen lights revived us for our goals and even mundane tasks at hand. This is not to mention the incredible photography one enjoys for years to come after such a journey.

Regardless of spiritual connections to lighthouses or lack thereof, these old lights help you remember what is most important in daily life. Those lessons are of fortitude, enlightenment, perseverance and above all else, serving as a beacon to those around you who must weather their own storms.