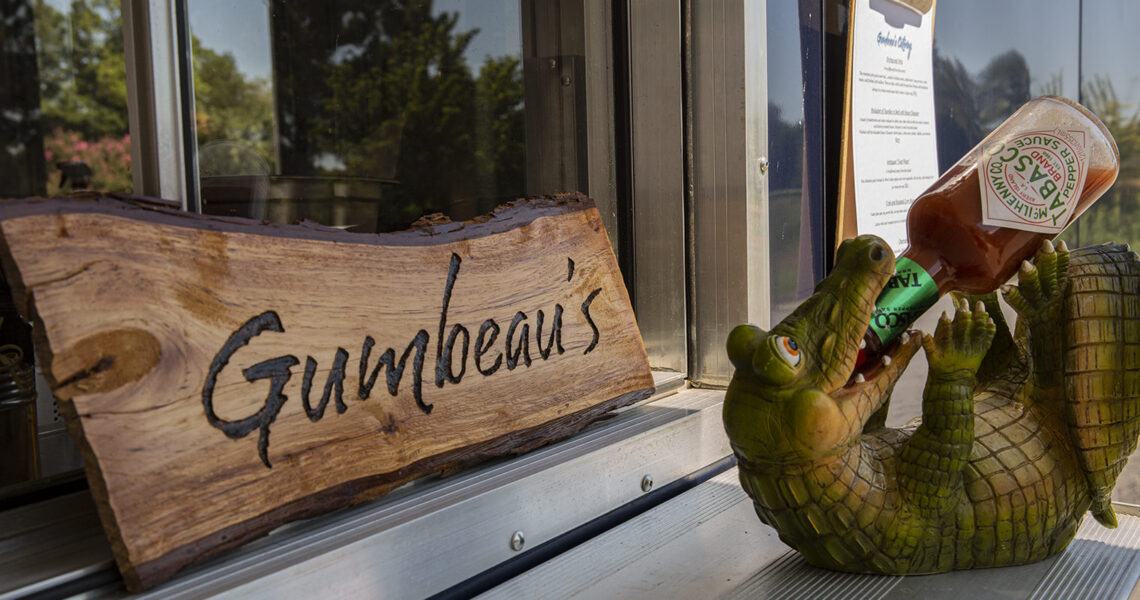 On a sunny Saturday, Creative Director Nicholas Crawford and I set out on an impromptu drive up to Virginia’s River Realm. Good Luck Cellars was hosting Gumbeau’s Catering for that particular day, to provide lunch for vineyard workers and visitors. Little did we realize the true culinary gem we were about to experience.

Gloucester, Virginia’s Gumbeau’s Catering is not merely a “food truck.” Upon seeing owner and chef Beau Felder’s kitchen set up in a parking lot, you realize this is a caterer you call in for everything from casual fare to upscale event cuisine.

On first speaking with Chef Beau Felder, one notes his seemingly relaxed approach to his craft. Few chefs appear so at ease just before the first diners arrive for the day. When you learn of his past as a combat-facing U.S. Marine, this ease appears even more remarkable. But the blue mirrored appearance of his kitchen suddenly makes perfect sense.

Felder is an enigma in many ways, despite being so approachable. When you sample his cuisine, you find yourself in a position of wondering how someone with such culinary talent spent so many years in the country’s counter-terrorism service. But maybe all good things come to those who wait. Maybe his years in uniform abroad seasoned his palate and skill now presented in well-crafted menus and made-to-order plates. Perhaps that earlier regimented lifestyle enables the masterful work conducted within a limited kitchen space. The public had to wait for the maturity those life experiences bring. Today they meld within this friendly, yet focused addition to Gloucester’s food and events scene — and the wait proves worth it.

Beyond his blue kitchen offerings, Felder also delves into smoked, barbecued and kettle-cooked cuisine through a second trailer. He speaks with a certain fondness of all of his efforts, particularly some upcoming adventures for local festivals. These future events will continue to exhibit his love for quintessentially Southern Louisiana fare, such as alligator, frog legs, crawfish and cauldrons of Jambalaya. But be forewarned: If alligator tacos make the menu, come early to ensure you get to enjoy them. They sell out as event attendees embrace a renewed love for ‘gator, despite some claims of not liking this particular meat from other chefs.

Lest anyone pigeonhole his culinary skill into the standard New Orleans, Creole or Cajun categories, bear in mind that New Orleans itself is a melting pot of multiple cultures. The city was founded on the backs of African-Americans, Cajuns, Creoles, French, Germans, Irish, Italians, Jewish, South and Central Americans, Vietnamese and Caribbean Islanders. In the same way, Felder’s background lends itself to its own melting pot. Along this vein of blending cultures across common threads of flavor, Chef Beau’s menu for the day included his own interpretations from various geographies.

On this Saturday afternoon in the vineyard, we sampled Shrimp and Grits, Rouladen of Duxelles in Beef with Sauce Chasseur, Antiguan “Goat Water,” Crab and Roasted Corn Bisque and Charcuterie. Even with his polished custom kitchen’s portability, the chef makes each plate to order.

From the first bite of Gumbeau’s Shrimp and Grits, I can only say, “Wow.” Chef Beau makes grits unlike anyone else. His feature a decadent creaminess even the most southern of us cannot expect. To achieve this effect, he cooks his grits in chicken stock, whole butter, heavy cream and cream cheese. Scallion adds flavor and – on this particular day – blackened Gulf shrimp balances smoothness of the grits with just enough Cajun flair.

As for the Rouladen, Chef Beau rolled top round and hickory smoked bacon with mustard around sautéed mushrooms and onion reduced in white wine. He braised this in stock and demi-glace. What follows is a dressing of a wonderful Sauce Chasseur of demi-glace, white wine, shitake, shallot and tomato.

Being that Beau also hails from New Orleans and his catering venture is called Gumbeau’s, one might expect his Southern Louisiana cuisine to be on point. But I still felt particularly hesitant about the day’s Antiguan “Goat Water,” a thick stew resembling a gumbo. Being from Nola myself, I understand this type of dish is not one all do well. Still, Felder’s islandic stew proved as delightful as the prior two dishes.

Chef Beau used New Zealand goat braised in spices of the West Indies for this globally rich bowl complete with root vegetables. His hand is not too heavy in the spicing. Instead, he enables sensitive palates like mine to enjoy a bowl of authentic Southern Louisiana and Caribbean flavor without those delights being canceled out by tear-jerking heat.

Finally, we tried Crab and Roasted Corn Bisque. Felder holds this recipe tightly. He simply does what he does to make the crab stand out amidst the creamy fresh corn flavor. Of course, we should expect that magic from him at this point in our tour de saveur.

What continues to boggle my mind after meeting Felder and getting to know Gumbeau’s is the origin of this talent that presents itself in a shiny, tidy custom kitchen on wheels. After 21 years as a military dependent in various regions and countries, I find myself so puzzled by the bridging of his prior career with the present one. His talent certainly must have laid dormant during those uniformed tours of duty. While it almost smacks of years of enjoyable cuisine wasted, perhaps it is that time spent percolating that the talent was fully enabled, honed and energized.

I even asked Felder why he did not take the “easy route” of a continued government paycheck. He could have so seamlessly claimed a long-term role of civilian contractor work in counter-terrorism. Almost every military person I have ever known falls quickly into that contractor and subcontractor trap after military service. But after asking this twice, I could sense that the “easy road” did not resonate within him.

What Chef Beau Felder possesses is an inborn talent. His talent is a rare one that all too many entrepreneurs ignore for the ease of a consistent paycheck. We are all blessed he possesses this entrepreneurial spirit, making the choice to pursue his flavorful passion and bring a bit of Southern Louisiana to Virginia. The going gets tough for restaurants and other food ventures “out there.” But if anyone can survive the industry’s trials and tribulations, I am sure it will be this Southern Louisiana Marine who knows his way around a global kitchen.