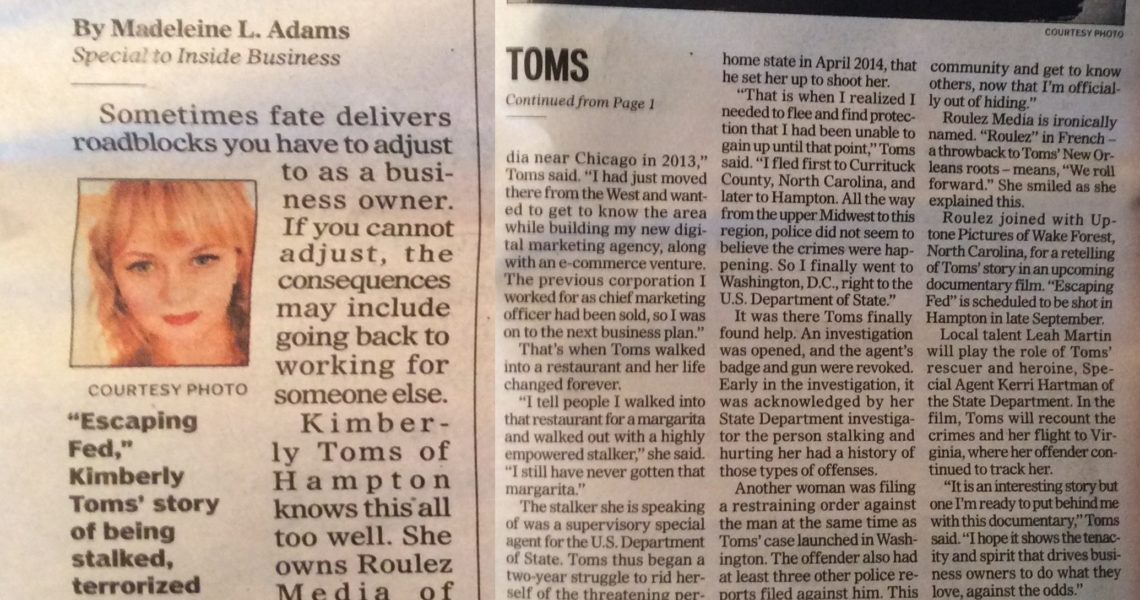 Sometimes fate delivers road blocks you have to adjust to as a business owner. If you cannot adjust, the consequences may include going back to work for someone else. Kimberly Toms of Hampton knows this all too well. She owns Roulez Media and the road blocks she encountered during her company’s startup are now the subject of an upcoming full-length documentary film.

“I was starting Roulez Media near Chicago in 2013,” Toms says. “I had just moved there from the West and wanted to get to know the area while building my new digital marketing agency, along with an eCommerce venture. The previous corporation I worked for as Chief Marketing Officer had been sold, so I was on to the next business plan.”

That’s when Toms walked into a suburban Mexican restaurant and her life changed forever.

“I tell people I walked into that restaurant for a margarita and walked out with a highly empowered stalker,” she recounts. “I still have never gotten that margarita.”

The stalker she is speaking of was a Supervisory Special Agent for the U.S. Department of State. Toms thus began a two-year struggle to rid herself of this threatening person who immediately started digging into her driver’s license, auto registration, social security, credit, family and other background information. He even watched her through her electronic devices, knowing what color dress she was wearing or precisely when she arrived at a location hundreds of miles from him.

“It was the proverbial television slasher movie kind of activity,” she jokes. “But it was real life. It was my life.”

The federal agent committed several serious crimes against her over the span of a year, while threatening her life if she told authorities of his actions. It was when he found out she was fleeing his home state for good in April 2014, that he set her up to shoot her.

“That is when I realized I needed to flee and find protection that I had been unable to gain up until that point,” Toms said. “I fled first to Currituck County, North Carolina and later to Hampton. All the way from the Upper Midwest to this region, police did not seem to believe the crimes were happening. So I finally went to Washington, DC, right to the U.S. Department of State.”

It was there that Toms finally found help. An investigation was opened and the offender’s badge and gun were revoked. Early in the investigation, it was acknowledged by her State Department investigator that the person stalking and hurting her had a history of these types of offenses.

In fact, another woman in his home state was filing a restraining order, at the same time as Toms’ case launched in Washington. The offender also had at least three other police reports filed by women in the past. This led to the formation of a joint task force around the matter.

As she is awaiting the formal closure of the case through the State Department this summer, Toms is finally getting to launch the business she had to put on hold due to the crimes.

Of this delay, Toms says, “I’m so pleased that I’m finally getting my life back. I started using my name in public just a few months ago and can actually say, ‘I’m Kimberly Toms and I own Roulez Media.’ I can actually start taking on clients, launching projects and building everything I intended to build four years ago. I can be part of a community and get to know others, now that I’m officially out of hiding.”

Roulez Media is ironically named. “Roulez” in French – a throwback to Toms’ New Orleans roots – means, “We roll forward.” She smiles as she explains this.

“French is not the easiest language for a new brand’s name,” she admits. “But I am finally rolling forward and I’m doing it under a French name.”

Roulez Media’s website is RoulezMedia.com. The brand has recently slated a retelling of Toms’ story in an upcoming documentary film. Called, “Escaping Fed,” the film shoots in Hampton in late September. Local talent Leah Martin plays the re-enactment role of Toms’ rescuer and heroine, “Special Agent K” of the U.S. Department of State. In the film, Toms will recount the crimes and her flight to Virginia, where her offender continued to track her.

“It is an interesting story but one I’m ready to put behind me with this documentary,” Toms says. “I hope it shows the tenacity and spirit that drives business owners to do what they love, against the odds,” she said.

To learn more about Escaping Fed, visit the film’s website at EscapingFed.com. The production presently has an IndieGogo campaign to raise the last $40,000 needed to ensure the film is completed and gains national exposure.

“We are very grateful to anyone who can help us fund this project forward,” Toms says. “Of course, there is always room for those desiring to get their feet into Hollywood through Executive Producer, Co-Producer and Associate Producer roles.”

Roulez Media is based out of Chesapeake.

“I’m still quite apprehensive about the threats from my offender,” Toms says. “But I am so excited for the future and still believe everything happens for a reason. I see I am as strong as I believed and can honestly say, entrepreneurial tenacity is a real, tangible thing.”