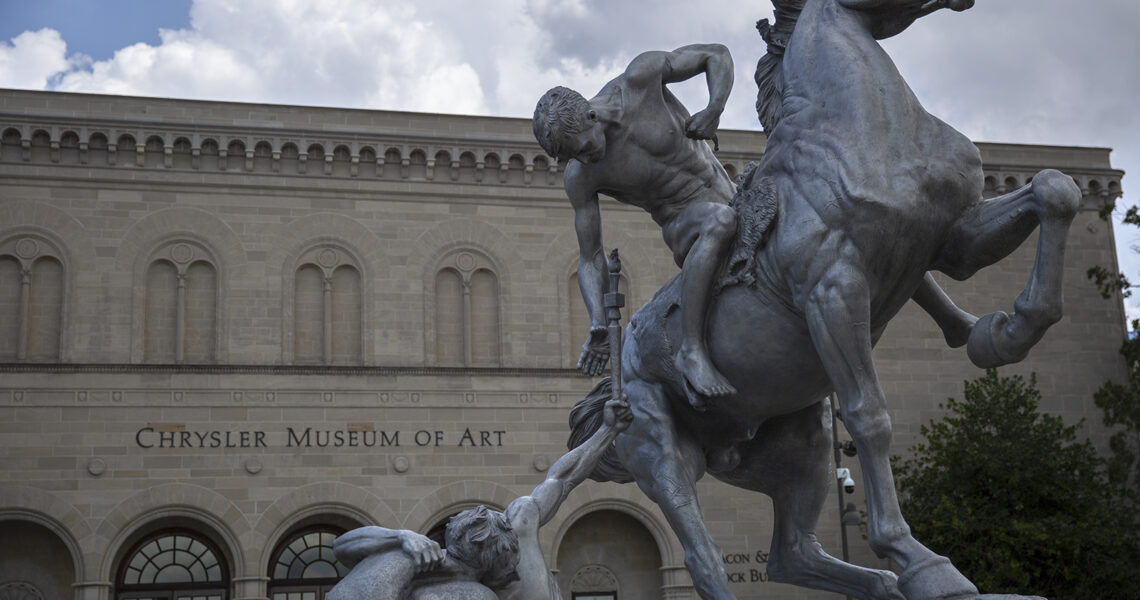 It was September 2, 1945 that Japan officially surrendered to the Allies to end World War II. At that time, the “American Caesar” General Douglas MacArthur delivered a remarkably penned speech at the surrender ceremony aboard the U.S.S. Missouri in Tokyo Bay.  His words hold true even today, perhaps more so than ever:

Yet we still reside in the “blood and carnage of the past,” albeit on domestic ground.

These words brought a lump to my throat and heaviness in my chest. What will it take for people to understand how to dedicate a world to the dignity of man and fulfillment of his most cherished wish for freedom, tolerance and justice, as MacArthur said?

As your eyes move past these inscribed words and around the walls of the rotunda at the MacArthur Memorial Museum in Norfolk, Virginia, you catch glimpses of colors surrounding the legendary man’s sentiments. Those colors, battle flags of MacArthur’s military campaigns, show how much this one human dedicated to our ongoing freedoms as the United States of America. He fought hard and won to preserve what we stand for and believe in, never wavering in his belief that this world of dignity exists and awaits all of mankind.

Where is this dream today?

Reflecting Upon Your American Ideals through a Man of the Past

At the MacArthur Memorial Museum, in the rotunda’s center are the graves of MacArthur and his wife Jean. There is something so romantic about their position there, together under the dome of this well-earned memorial. In one of the galleries, among the military memorabilia and personal effects, a photo of Jean with John Lennon visually leaps from the wall.  Her broad smile with the Beatle, clearly engaged in an amiable conversation, warms you to her instantly. Similar images with Presidents Reagan and Clinton also evoke a certain warmth, humanity and respect. In many ways, you sense that she and her general fit together like puzzle pieces, each completing the other, just as they find their eternal places together in the round hall.

Mrs. MacArthur’s life could not have been easy, marrying in 1937 the man who carried our country through the Second World War only a handful of years later. As far as newlywed life goes, World War II interrupted the honeymoon for the general and his second wife. Her role required a certain selflessness, one lived in the shadows of the man now depicted in bronze at the museum’s front steps. Still, she seems to have pulled it off with faith, understanding and dignity, the characteristics MacArthur speaks of in his famous speech.

Within the MacArthur Memorial Museum are so many intriguing artifacts that one cannot help feeling renewed patriotism and spiritual investment in the land of ideals we call America. But at the same time, in the political and social climates of today, you also bring your own notions of shame into the space. Whether you feel we struggle under specific politicians, suffer renewed racism or persecute others not as good people but “the lesser of the evils,” ambling through the exhibits in this Norfolk landmark revives your patriotic consciousness.

Today, if he walked among us even for just a moment, what is the message MacArthur would rush to convey? Perhaps that is something we should all consider at least in homage to a man who so resiliently and valiantly put his life on the line for the rest of us. At the same time, consider his troops who followed him into battle and why they did so. What were they fighting for? Do we honor them in how we live?

Consider some of the general’s next words:

The reality for each of us as individuals is that we still live and breathe, as long as we live and breathe. None of us are expected by others to perform as a MacArthur. But we all must do our part to live up to his words. They are truth and there is an ominous message therein.

What can we do to live up to the dignity of man and the fulfillment of his most cherished wish—for freedom, tolerance and justice, as well as to maintain future security and the survival of civilization? How can we improve human character through the spirit, if we are to save the flesh? Do MacArthur’s words even resonate with us today as they did when spoken by the man who received more than 50 standing ovations in his final Congressional address?

Cultural Advancements for the Spirit at Norfolk Chrysler Museum

As you ponder your thoughts about human dignity and mutual respect, as well as improving our character as a united country, consider taking in some visual art. After all, art opens your mind and inspires your spirit.

Only moments from the MacArthur Memorial is Chrysler Museum of Art. Situated in a lovely Norfolk river niche called The Hague, just where it meets the Ghent and Freemason neighborhoods, you find the cultural artifacts one needs to bring deeper introspection and creative energy to your Southeastern Virginia visit.

One beautiful aspect of the Chrysler Museum is its digestible layout that takes you from ancient works through the modern era. It is not “exhibit overkill,” rather a dance upon your cultural palate with a genteel end just as you start to tire of walls, floors and frames. Unlike other monstrous museums where you must spend days exploring to glean a full picture of the collections, at Chrysler, you leave with a whetted appetite for upcoming special exhibits.

Chrysler Museum of Art also offers ample opportunity to engage yourself fully in art through an array of classes and craftwork. At Perry Glass Studio, observe glass blowing by skilled artisans and practice this centuries-old craft yourself through hands-on activities. Take day trips, such as chartered tours to historic places, as one recent visit to Thomas Jefferson’s Monticello and wine tasting at Barboursville Vineyards provided. Or learn about the art of movement through yoga in the galleries. These are just some of the unique events and experiences that prove distinctly Chrysler.

Despite the museum’s galleries being easily explored in the course of a few hours, you have ample reason to return time and again for a fresh perspective on all things “art.”

Fresh Air and a Bit of Garden Teahouse Fare, Thanks to Taiwan and a Norfolk Local

After walking throughout indoor spaces for several hours, you need a little fresh air and room to move to a different internal rhythm. A great place to start after downtown Norfolk museums is at The Pagoda, a lovely little park in the West Freemason neighborhood.

At The Taiwanese Pagoda, you enjoy short paths to walk while exploring water features, shrubs, a koi pond and trees. As the waterfront park’s centerpiece is the actual Pagoda, also known as The Marine Observation Tower, gifted to Virginia by Taiwan in 1989. At the top of the tower, you enjoy panoramic views of the waterfront, USS Wisconsin docked nearby and the Oriental Garden.

If you get hungry, simply head down to The Pagoda’s own Hummingbird Macarons & Desserts, a teahouse where you can enjoy – you guessed it – a vast selection of macarons, sandwiches, cakes and other bakery delights. Opened by Norfolk’s own Kisha Frazier on Valentine’s Day 2019, this new Tazewell Street addition to Ms. Frazier’s Botetourt Street operation offers new delights with her customers’ favorites, within a uniquely Norfolk space you will love.