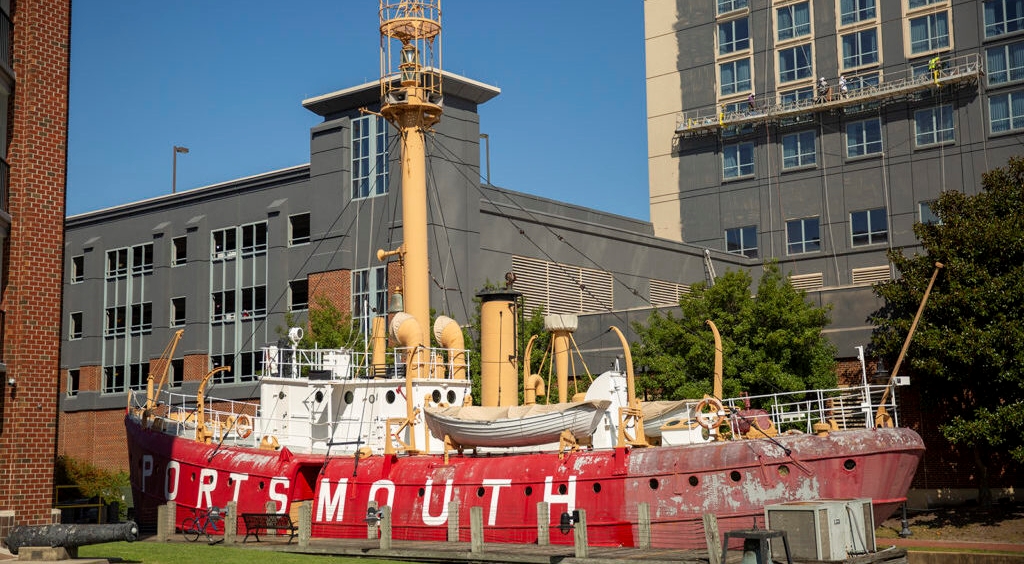 Whenever I choose to live in a new region – as I do quite often, given an ongoing case of curiosity over what is on the other side of the fence – I love to really “dig into” my surroundings. I enjoy exploring all of the regional trails and parks, just as much as I love checking out local museums. I am always dumbfounded by people who live in one area their entire lives, yet do not visit such places. But then, I was a little girl who never dreamed of her future wedding. Instead, I sank down into the cool grass of my front yard, stared at the clouds and fancied my future self a traveler and explorer. So maybe exploration is just in my bones.

For today’s exploration, I only had to walk a few blocks. For another few weeks at least, I live in Olde Towne Portsmouth, Virginia. It reminds me of a small New Orleans, minus the bare skin flashing and bead throwing, of course. Being from that Crescent City, downtown Portsmouth was a perfect fit for my time being.

Before I move on, I wanted to check out the Portsmouth Naval Shipyard Museum and some other local attractions. Of course, this means bringing creative director and photographer Nicholas Crawford along for the journey.

Roulez’ own Nicholas is a lifelong resident of Portsmouth, part of a family of Crawfords. I tease him constantly that surely he owns Crawford Parkway in Olde Towne, along with Crawford high-rise buildings, Crawford apartments and Crawford parking lots. So far, he has uncovered no such family connection. I am convinced it will happen, though. One dip into his family geneaology should confirm my conclusions and link him to Colonel William Crawford, a former buddy of President Washington.

Until that time, he is pleased to look upon High Street as a pretty little place in downtown Portsmouth. He sighed one day, “I just love High Street.” I find it lovely, too.

People visiting Portsmouth, usually by way of ferry from Norfolk’s Waterside District, enjoy High Street’s historic buildings. Here, you find a good selection of quaint restaurants, pubs and even an authentic German biergarten. Although I lived in Germany for five years myself, I am ashamed to admit I have yet to pay the latter venue a visit. It will happen soon and you will read about it here, I am sure.

All of downtown Portsmouth proves both highly walkable and scenic. High Street is only a few steps from the ferry landing. The downtown district starts at the seawall overlooking Norfolk Naval Shipyard. From that end, you certainly cannot miss docked ships in various states of maintenance, construction and repair. Looking down High Street from the water, you also cannot miss the loveliness of this boulevard that has so many stories to tell.

Norfolk Naval Shipyard in Portsmouth was once Gosport Shipyard, founded in 1767. The Brits looked upon Gosport as the most impressive shipyard in America, likely as they strategically salivated in hunger for what the port could mean for the future of Britain. We all know how that turned out.

For the Civil War, ironclads were the newest technology at the docks by this time collectively called Norfolk Naval Shipyard. These heavily fortified ships first tested their metal in the Battle of the Ironclads on March 8 and 9, 1862. The Union-Confederate battle took place in the waters just off Portsmouth and Hampton, Virginia.

You can see this site from the Monitor-Merrimac Bridge, a long series of bridges and tunnels connecting Hampton Roads. The bridge and tunnel system is named after the dueling ships, the Monitor and the Merrimac. Actually, Merrimac was the name of the wooden vessel that became the CSS Virginia when clad in iron. The Virginia was later destroyed in the shipyard as the Confederacy evacuated Norfolk.

As you explore the Olde Towne Historic District, on each block you find architectural gems from multiple eras. These styles include Greek Revival, Queen Anne, Federal, 19th and 20th century revivals, late Victorian and Romanesque Revival. You can take some time to explore these neighborhoods without fear of getting too turned around. The riverfront curves around Olde Towne from High Street. So the walk to the neighborhood’s edge at Crawford Parkway and the seawall is only about four blocks. If you get lost, simply follow the sea wall along its curve to downtown at the ferry landing. Or on the western side, you can follow Effingham Street back to High Street’s downtown district.

In this Olde Towne neighborhood, Napoleon, multiple presidents and even Chief Black Hawk once stayed as esteemed guests. Benedict Arnold ambled about, as well. The traitor Arnold used the grounds of 300 High Street as his headquarters during his campaign to change the course of our history. Or more correctly, he toiled to one day see us all saluting the Union Jack. You can now enjoy coffee grounds there in The Coffee Shoppe on the site.

The Marquis de Lafayette toured Portsmouth in 1826. You can visit an arch erected in tribute to the Revolutionary War hero a few blocks north from High Street on Crawford Parkway. If you head toward that direction, you might as well pay the marina a visit. There, enjoy lunch at the laid back Fish & Slips Marina Raw Bar & Grill. Tell them Roulez and Lafayette sent you. Maybe they will know of Lafayette.

Clearly, life in Portsmouth was grand for centuries. That is, with the exception of June 1855. It was then that the ship Benjamin Franklin sailed into Portsmouth. With her, the ship brought yellow fever, killing one third of the town’s population by fall. But aside from those days, life was grand because of the port’s strategic location and the shipyard’s reputation.

It was based on that reputation that the sick ship Benjamin Franklin sailed toward the port for repairs. This spared their New York City destination a brush with yellow fever that could have changed the course of that city’s history.

Where High Street meets Crawford Parkway, you can see the Portsmouth Naval Shipyard Museum across a parking lot and against the seawall. There, in a building with its own stories to tell of seaside life, hurricanes and reconstruction, visitors from all over the world witness much of America’s history, according to the sailors who landed and worked here.

I am a Navy doctor’s daughter, so I have had some interest in America’s naval history. I cannot say that my interest was immediately piqued by anyone’s mention of such a museum. But I must admit I enjoyed my visit. I learned so much more about this port at the river’s mouth and where history has played out time and again.

In the museum’s exhibits, you learn about 250 years of American history, particularly from the Revolutionary Era forward. Just as the museum sits at the starting point of High Street at the seawall, it provides an excellent starting point for getting to know this historic town. After all, the town – now a rambling city – exists because of the shipyard. It thrives because of the Navy’s presence and the continuing industry of the shipyard.

This is Americana at its finest, starting in the waters from which many of our ancestors came. History converges even in Olde Towne where native politics played a significant role under iconic leaders like Chief Black Hawk. There is almost no aspect of American history that has not touched or passed through Portsmouth. So there is much to learn and see here, particularly coming together at the Portsmouth Naval Shipyard Museum.

Visitors to the museum seem most delighted by ship models, historic uniforms – even from the Civil War – and military artifacts. There is even humor to be found, tucked into one corner and courtesy German sailors from two ships that landed here in 1915.

Before America’s involvement in the first World War, German vessels Kronprinz Wilhelm and the Prinz Eitel Friedrich sailed into Portsmouth for repairs. Their sailors were held here by the U.S. Government, but our people treated them like long lost friends until America became involved in the war in 1917.

Along with doing a lot of wining and dining with the elite of this city, the sailors spent their time building Eitel Wilhelm, a miniature German village in the shipyard. They provided tours for people from all over the United States. The sailors even printed their own newspaper. That is, until we became immersed in international conflict, at which time the sailors were sent to Fort MacPherson as prisoners of war.

Another of the most fascinating sights to see in Portsmouth is the Lightship Portsmouth Museum. The city permanently dry docked the ship at the seawall at London and Water Streets. This is just a few blocks from the Portsmouth Naval Shipyard Museum. You cannot miss its bright red, yellow and white exterior, sitting adjacent to the Renaissance Hotel parking garage.

The Lightship Portsmouth Museum provides a historic view of lightship operations, complete with a tour of its fascinating interior. Inside the vessel, you gain a clear perspective of life aboard these sailing lights that saved so many lives on our seas from 1820 forward. This particular lightship operated from 1915 to 1964.

Because of the ship’s dry docking, there is no concern for anyone with equilibrium issues suffering from movement. She permanently sits as a landlubber incarnate, although likely missing her waves.

Another Page in Portsmouth History

A page in Portsmouth history all too often neglected in museums is an important one for people of all ages and from all places. This particular page takes you to the Portsmouth Colored Community Library. Venture to 904 Elm Avenue, only a short drive to the edge of downtown Portsmouth. There, you find a lovingly restored yet understated building.

The library provides a breathtakingly real glimpse into time before integration. The original building sat on South Street near Effingham during its use from 1945 to 1963. In its new location, you find a rare example of a 25 year effort to provide a library for the city’s Black citizens. Remember, in those days not all citizens were free to use city-provided resources. Separate was rarely, if ever, equal.

In 900 square feet, you revisit or learn for the first time of the struggles of African Americans. It was a fight to gain access to even the most basic of services we all take for granted today. Through books, newspapers and exhibits, this library comes to life. It speaks its own volumes about those who toiled to bring it to fruition.

Now, so many people seem to have forgotten lessons Americans have learned throughout history. So this is an important stop in exploration of all Portsmouth has to offer. This little library speaks in a voice all need to hear, however far you live from its city.