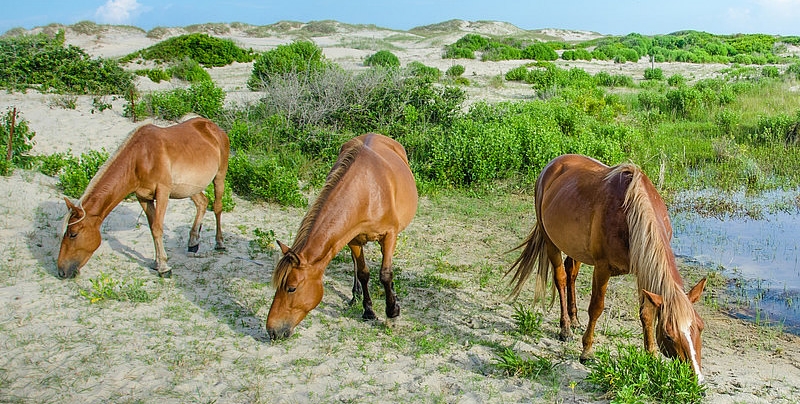 The newest celebrities of the East Coast are not located in New York, Boston, Miami or even Charleston. Unexpectedly, Currituck County, North Carolina is a breeding ground for some of the hottest new faces on social media. Even more unexpected, these media darlings are hairy-faced wild mustangs of Corolla, a breed of horses calling the area home since the 16th century. Thanks to Facebook, Twitter, YouTube and other social media the once quietly revered Corolla wild horses of the Outer Banks can be watched from anywhere in the world, no four wheel drive required.

Over one hundred Bankers, as they are locally known, roam 7,544 acres of isolated beaches of North Carolina as they have for almost 500 years. These are direct descendants of Spanish horses, still featuring distinct physical markers and the pure bloodline of those original few. Because of their isolation and preservation of their wild heritage, these horses are a unique herd unlike any in the United States.

There are a few possibilities in regard to establishment of Outer Banks herds. Largely reliant upon a combination of historic documentation and folklore, two primary theories exist to explain the Bankers’ origins.

First, Spanish explorer Lucas Vasquez de Allyon was granted the right to colonize the eastern seaboard of America, courtesy a charter of the Spanish king in 1521. Subsequent Spanish presence in coastal North Carolina angered area Native Americans and caused an uprising. This is believed to have been due in part to Spanish kidnapping of native children for enslavement. As the newcomers fled hostile natives to Spanish occupied Florida, livestock was left behind.

A second theory is centered around Sir Richard Grenville’s English expeditions of the late 1500s, as overseen by Sir Walter Raleigh.  The English were working to colonize America’s east coast just as swiftly as the Spanish had attempted, each desiring to stake a permanent claim in the New World.

Grenville’s ship logs specify transport of livestock and other goods in the 1580s to Raleigh’s colony encampments on Roanoke Island. It is believed that during one of these excursions a ship became grounded by the shallows around Portsmouth Island. It is thought that debris and livestock, including mustangs acquired through trade with Spaniards in the Cape Fear region, either washed or swam ashore onto Outer Banks islands.

Whatever the genesis of Corolla wild horses, the herd’s attributes still remain true to Spanish mustangs of their founding era. It is this bloodline and heritage that many people of the area work so hard to preserve. One such agency and the primary non-profit caretaker of the herd is the Corolla Wild Horse Fund.

In both 1992 and 2007, Texas A&M University’s equine geneticist Dr. E. Gus Cothran analyzed the herd’s DNA. The results clearly indicated that Corolla’s wild horses are indeed from Spain and are one of the rarest and oldest strains of horses in the world. Listed as critically endangered, this breed of Colonial Spanish Mustangs is nearly extinct.

Once heavily reliant upon 4×4 safaris on isolated beaches for teaching summer visitors about the herd, Corolla Wild Horse Fund has learned much about using social media to develop marketing “legs.” Hardly does a day go by without a heartwarming Facebook posting from the Fund’s official page, about how the herd is doing. A staple of the social media campaigning is beautiful photography of these majestic animals in their native beach habitat. Of course, animal imagery and stories are viral and these creatures are no exception.

Spring foals always bring great following. This year, stories of Rosa, Josh and Guillermo started summer off as three of the young ones to watch. It was soon discovered that William, as Guillermo is affectionately known, needed veterinary intervention due to several health concerns. It was believed that he may have been born prematurely.

After extensive care and supervision, William was finally able to return to his home county in mid-July. As he has been fairly domesticated at this point in his life and exposed to potential disease from other horses, he will not be returning to his original wild herd. William’s life will take a new path through adoption.

Thanks in large part to the Corolla Wild Horse Fund’s social media activities and the warm updates available each day through Twitter, Facebook and other means, over $25,000 was raised to pay for William’s surgeries, a nursing surrogate mother named “Pebbles,” transportation and care. He is doing well and should continue to thrive in Delaware, his new home.

All should then be quieter as summer visitors retreat for autumn and the Fund resumes fall and winter activities. In spring, new Spanish stars will inevitably be born on the beaches of Currituck County and announced on Facebook for all to enjoy.

Downside of Fame and Prosperity

With fame and prosperity come associated problems. The problems for Corolla wild horses are primarily man-made. Visitors and locals alike are often disrespectful of the horses’ need for space and absence of interference.

Humans tend to want to “manage” individual horse or herd behavior and try to entice the wild creatures closer with food left out near area beach homes. Such food is only detrimental to the species. A two week old foal died in a past summer from watermelon rind left out by summer visitors, specifically meant to lure the beautiful beings closer to a rental home. The watermelon rind caused a painful death of intestinal impaction.

With each summer season’s crowds comes increased risk of a horse-auto accident. One of the herd’s most majestic stallions was recently killed on his own beach by an SUV traveling too closely and swiftly.

A certain political divide also exists regarding the horses’ presence on beaches so many developers desire to tap into for new home construction. It was actually human encroachment that led to the Bankers’ relocation in 1995 to their present acreage from a tract further south in the areas of Duck and Corolla. As the horses do not have land of their own as part of a wildlife sanctuary or preserve, they now roam 7,544 acres of both privately owned and public lands. Their fate is at the mercy of individuals and groups.

In the 1920’s the official Outer Banks total herd count was over 5000, according to National Geographic. Now, only just over 100 Corolla Bankers remain and the region’s management plan calls for a mere 60. That management plan is under political debate with Fund desire for it to be raised to 120 to 130.

However, natural balance of the ecosystem is hindering passage of this law, as United States Fish & Wildlife Service is tasked with maintaining the balance of other local, indigenous species negatively affected by the horses’ presence in larger numbers.  After all, one must remember that other species were here, first.

Another herd does exist on the Outer Banks to supplement the Corolla number. The Shackleford Banks herd is federally protected by the National Park Service slightly south from Corolla on Cape Lookout National Seashore. That herd’s ideal count of 120 is separately maintained, although also designated as pure Colonial Spanish Mustangs. The total sum of 230 is a far cry from between 5000 and 6000, less than one hundred years ago.

Regardless of political debates and which side of the fence you choose to graze on, the Bankers are still masters of their present domain. When humans neglect to give proper space to the horses, the minimum of 50 feet as required by law, these majestic creatures do ensure some of those humans walk away very clear on who rules the land. Those rulers are the four legged occupants, none too shy about leaving bite marks on individuals who persistently encroach for a selfie, ending up instead with “stupid human photos” taken by emergency room personnel.

Dear William, the little preemie born this past summer, will enjoy green pastures, plentiful feed and stable living in America’s first state, Delaware. But his brethren and ancestors existed here in Corolla with more consistency and tenacity than we, as humans, were even able to muster. We did not succeed in consistent settlement until after 1600 in America, whereas the Bankers had already established their stronghold for at least a quarter century. Surely that, alone, demands the respect of legal observation and respectful interaction when combing the beaches and seeking a glimpse of the magnificent Corolla wild horses.