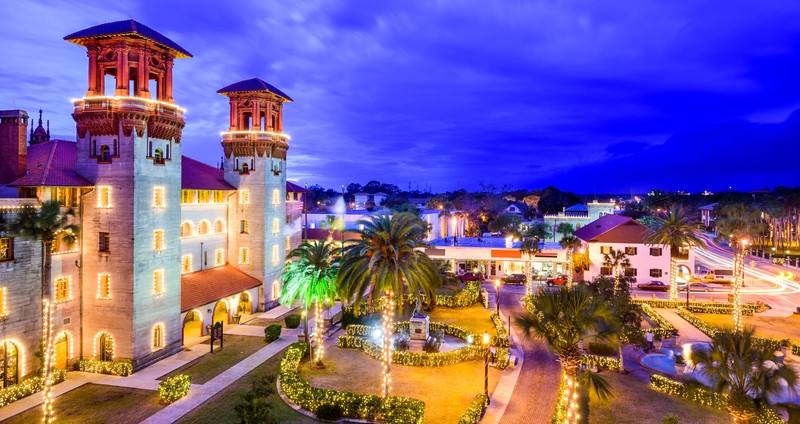 I am a grown up. As makes sense, when going on vacation I want to go on a grown-up vacation.

In other words, lying on a beach where spring break television is filmed is not enticing to me. I want to be comfortable, pampered even. I want to be entertained, well fed, dressed up, dressed down, worked out, manicured, provided with many shopping options, educated about the places I visit, kneaded like dough, and pretty much left to do whatever it is I wish to do. That is a vacation.

Fittingly, when I was approached with the option of taking a trip to St. Augustine, Florida, my first thought was of repulsion. That, just as the images of bikini bunnies and buff dudes bounced in my head, crowded beach sand under their feet, loudly drunk revelers all around, and flea-bag waterfront motels looming cheaply in the background. Of course, one cannot leave out the boardwalk souvenir and “mix-and-match your swimsuit” shops.

But one of St. Augustine’s tourism industry folks, Jay, insisted that St. Augustine is not the cliche that is very often Florida. He was right. Upon entering the city I didn’t see even one plastic pink flamingo. In fact, I cannot report seeing a single recreational vehicle in motion, nor a Speedo stretched to its death on a body about five sizes too big for it. So, go back to your office, Jay. I have some exploring to do!

Decompression In the Old and New

Since September 1565, people have been landing and remaining in St. Augustine. This establishes the city as America’s oldest continually occupied European settlement. It was first inhabited by the Spaniards, then the English, the Spaniards again, followed by pre-Victorian Americans in 1821. Rarely is ownership of a possession so disputed, without having great appeal, beauty, and value. St. Augustine has all of those traits, whether in the eyes of a real estate owner, political leader, or vacationer.

Upon driving down King Street into the town of just over 12,000 full-time residents one first notes the uniqueness of St. Augustine’s architecture. Looming hotels, museums, educational institutions, places of worship and other facades are distinctly and grandly European, while residences of old are clearly settlement houses that once held practicality of survival high with the hopes and promise of the New World.

Present day museums echo both the grandeur and bare necessity of old, like two sides of a coin. This is evidenced by the Lightner Museum on King Street with its three floors of costumes, furnishings, Tiffany glass, and other artifacts of 19th century opulence. Another example is St. Augustine Historical Society’s Oldest House and Museum, the Gonzalez-Alvarez House on Francis Street, a National Historic Landmark and the area’s oldest surviving Spanish colonial dwelling.

Reminiscent of New Orleans and cobblestoned villages of the Old World are the city’s housing districts. These quaint and endearing neighborhoods are ones in which you can stroll and sightsee unguided. In doing so, you pass current residents who have clearly dedicated themselves to preserving these treasured homes that quietly encase historical, cultural, and even warfare-surviving emotional significance modern Americans rarely experience firsthand. These housekeepers live within that rich history every day, knowing only pieces of the full story walls certainly could tell.

Political leaders, business owners and inhabitants of St. Augustine have done a superb job of maintaining the Spanish colony’s integrity with an attention to details of period architecture and daily life. Although the community is the oldest in America, it has remained untouched by tourist kitsch. It is that which makes the town so quaintly appealing in a way that larger cities of old, such as New Orleans, unfortunately have not. This is an attentively-manicured and pristinely-kept version of “Once Upon a Time,” without so many smells and creepy corners that might keep a tourist in their hotel room at night.

In fact, it was while on a walk down St. George Street after a sumptuous dinner that I realized life in the big city has frayed my own nerves. I had eaten then cancelled my limousine service back to my hotel, desiring to walk off both calories and metropolitan stress. I wound and turned down many streets, my heels clicking on the cobblestones, my mind fully engaged in a pure lack of thought, head clearing with fresh ocean air and evening breezes of mid-April, as I window shopped and made mental notes of places I would explore the next day.

It was dark, about 11:00 p.m. As a truck slowly ambled past and the driver said, “Hello” from his window, I became suddenly aware that I had neither been instinctively watching my back nor stressing over whether personal safety was at risk. Yes, this is a place where a solo traveler can explore in full peace. It is a place where decompression comes easily.

My gracious hotel was the Hilton St. Augustine Bayfront on Avenida Menendez and the bay front, just a short walk from the Castillo de San Marcos, one of the most historic attractions of the area. I know exactly what you’re thinking: “You’re in a history-laden village and you stay at an international chain hotel?” Why yes I did, and with zero regret! Well, no regret except that of sleeping alone in my giant, comfortable bed.

It was a superb choice, as this is not just any “branded” hotel. It is one of the smallest Hiltons in the world, with only 72 rooms cozily contained within a Spanish Colonial façade of nineteen buildings. The hotel is adequately designed and constructed to fit well within surroundings dating back to the 17th century, yet with all of the modern comforts a somewhat spoiled traveler might desire. Most enjoyable was the lack of crowds in places such as the hotel workout room, a facility I enjoyed twice per day during my stay, as I could work out in solitude – something rarely enjoyed in a larger hotel or membership gym. I could have also enjoyed a solo dip in the pool that overlooks the bay, but I was so preoccupied with the sights of the town that I missed my opportunity.

Although the Hilton was well-suited for my wants and needs, if sumptuous luxury and pampering within the City Gates is the objective, the Casa Monica Hotel at the corner of King and Cordova Streets is historically suited to answer every desire. Originally designed, built and opened by Bostonian Franklin W. Smith – founder of the YMCA – in 1888, Casa Monica was quickly sold to railroad pioneer and local magnate Henry Flagler, who renamed it The Hotel Cordova.

Now again under the regal name Casa Monica, one of the Kessler Collection of unique hotels and a member of Preferred Resorts and Hotels Worldwide, Casa Monica is a Four-Diamond landmark offering exceptional comfort and world-class amenities. A boutique hotel with Spanish Moorish grand design and Victorian appointments of cobalt blue, deep red and gold, it resembles a European castle. The lobby showcases chandeliers, gilded furnishings, columns, arches, and a fountain. A penthouse view offering sweeping, panoramic views of the ocean, town, and bay front entice one into the not-so-subtle upgrade.

An Escape of Historic Opulence

Well beyond the City Gates and on the famed Ponte Vedra Beaches is Ponte Vedra Inn & Club, a distinguished choice for anyone seeking unparalleled service, opulent surroundings and upscale amenities, as well as a selection of recreational, dining, shopping, and relaxation activities that are rarely experienced within such unencumbered proximity to a historic site of St. Augustine’s caliber.

At Ponte Vedra – with its Five Diamond accommodations and pristine white beaches – 36 holes of golf, tennis, top-notch workout facilities, heated swimming pools, fishing and seaside enjoyment are all daily offerings, along with sublime spa treatments. For dining is your choice of meals at one of their four restaurants and three lounges, or in your incredible room.

As I had explored so much during my time in St. Augustine, I was completely wiped out and sank immediately into Ponte Vedra Inn & Club’s delightfully comfortable bed with soft sheets and four fluffy pillows, remote control in hand and oceanic views with swaying palm trees just through the room’s large window. After sleeping some of my exhaustion and the early evening away, I awoke with zero guilt and quite a bit of hunger, finding their 24-hour room service menu neither sparing nor without struggle, in deciding which of the many options to select, as well as which of the eye-catching rich desserts I should avoid.

In the late evening and by low light, I immersed myself completely in the spectacular space that was the bathroom. The giant tub beckoned me that night, with midnight bubbles, and the separate, large shower being the option for morning. Before leaving at checkout time the next day, I spent at least an hour longer than usual primping, as the vast dressing vanity in the bathroom encouraged me to sit, take my time, and start my day feeling as pretty as I desired.

My only recommendation for improvement upon my time at Ponte Vedra Inn & Club? That would be the same as for St. Augustine, in general: to linger much, much longer and explore so much more.