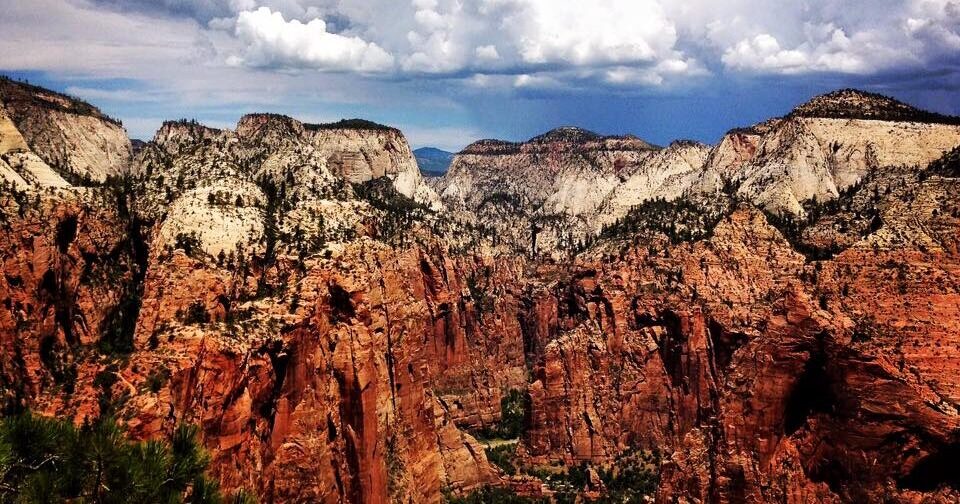 The Call of the Void | Roulez Magazine

On a recent outing with a friend, I explained that I fear heights because this fear is accompanied by a magnetic pull into the abyss. The look on their face was a funny mix of shock, fear and humor.

I have long known that I react this way to heights. Perhaps my worst adventure to date was climbing to the top of Angel’s Landing in Zion, where I had to stay anchored in the center of the peak because I felt so unsure of my ability to resist hurling my body over the edge.

On the way down from the peak, only about ten yards into our descent, my personal trainer man-friend slipped over the edge. His problem was not fear. It was machismo and over-confidence. As I shrieked, my first selfish thought was, “Now I’m stuck on top of this Godforsaken peak.” But as I glanced down, he was holding his massive frame to the side of the cliff by one arm that caught the safety chains as he fell.

I never forgave him for that. I never wanted to see him again. About a year later, he popped up again on my birthday and I was still mad about his near death experience. It has now been seven years and — yes — I’m mad right now, thinking about it.

Roulez photographer Nicholas Crawford and I recently climbed to the top of lighthouses. I feared being at the top, more because I always seem to crave the jump. Will I jump one day? Am I suicidal? Do others feel like this? What is this magnetic pull to the ground so far below?

We reached the top of our lighthouse climb and this time things were different. I felt an overwhelming urge to throw my iPhone far beyond the rails. As I took this photo, I was repeating in my head, “Do not throw the phone. Do not throw the phone.” The railing is visible, as my back is pressed up against the bricks.

The Call of the Void

Naturally, upon returning home from our lighthouse adventure, I had to find out what plagues me. After all, if I keep feeling magnetically pulled to the earth — the hard way, so to speak — I cannot keep climbing to new heights.

I found a recent study by Jennifer Hames, formerly a graduate student of Florida State University. The study’s report published in the Journal of Affective Disorders affirmed what I believe at my core. That is, I am not suicidal. Nor am I made of magnets and being pulled off tall buildings and cliffs.

Instead, the study found through 431 participants that this sensation of needing or wanting to jump is actually a misinterpretation of brain signals. I, and the millions of people like me, experience anxiety in a tricky way. Yes, that anxiety, she is a tricky bitch.

This seeming urge to jump — the call of the void — actually drives you away from the edge. Sure enough, at the top of this week’s 200 foot tall lighthouse, I kept my back tight against the structure’s core and away from the railings. But I was not feeling as shaken or fearful as I would in the past.

People sensitive to anxiety are usually the ones who experience this sensation most, according to Hames. It is referred to by researchers as High Places Phenomenon.

Differing Viewpoints, All with the Urge to Jump

Other researchers feel differently about this urge to jump. In a recent NBC News report, Pauline Wallin, a psychologist in private practice in Camp Hill, PA, asserts our will to be brave drives this call of the void. She believes the sensation is actually a thrill-seeking desire, one to perform without giving into our fears.

As for my urge to jump, we will leave it branded as “pride.” I do not enjoy the feelings, but I have still pushed myself to do some pretty scary things. There are many things, ahem — Angel’s Landing — that I will never do again. Still, I have broken through fear and have yet to hurl myself to the ground below. I did not fail or let myself look “scared.” That’s what this is really about, not being “scared.”

As I get older, I have much less desire to put myself in any form of danger. It just does not thrill me to feel so challenged. There is no junkie in my adrenaline. But I feel much better knowing I have not limited myself despite the call of the void.

As for my future, I do not think I will be following a guide through the wilderness of Alaska, tracking female Kodiaks with cubs. Nor will I take any insane TV “hosts” onto Katmai to watch bears mate. I certainly will not climb any more Angel’s Landings or other “scariest hikes in America.” Oh — and the Cessna 702s without seatbelts and the DeHavilland Beaver mail plane without a seat at all? I feel no more need to accept what I am provided in the name of “sport.”

From here forward, I want to let myself be “scared” when I feel like it and as I keep my back to the bricks, or even my feet on the ground, avoiding that call of the void.